If you should ever find yourself traveling east of Nürnberg, Germany (heading to Prague, for example), it would be worth your while to go a bit out of your way to visit the Basilica and Abbey of Waldsassen.  A small town right on the German-Czech border, Waldsassen has a long history, thanks to its Abbey.

(Like most places in Bavaria, the Abbey is magical at Christmas time!)

Waldsassen Abbey (Abtei Waldsassen) is a Cistercian nunnery, formerly a Cistercian monastery, located on the River Wondreb, in the Bavarian region known as the Oberpfalz (Upper Palatinate).  In the Holy Roman Empire Waldsassen was an Imperial Abbey.

(Crest of the Oberpfalz on the left, and Waldsassen Abbey on the right.)

The Cistercians are a Roman Catholic religious order founded in 1098 in France.  The original emphasis of Cistercian life was on manual labor and self-sufficiency, and Waldsassen traditionally supported itself through agriculture and brewing beer.  Over the centuries, however, education and academic pursuits came to dominate the life of Waldsassen. 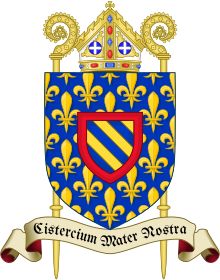 (Crest of the Cistercian Order)

The monastery was founded in 1128, making it one of the first Cistercian monasteries outside of France..

Waldsassen suffered greatly from the continual wars that raged across Germany from the 14th-16th centuries.  During the Protestant Reformation of the 16th century, the abbey was closed by Protestant forces, and did not reopen until 1648.

The abbey buildings were rebuilt in the Baroque style beginning in 1681.  In the first decade of the 1700s the main church and library were rebuilt in Rococo style.  This is what you see today.

What is rococo?  The characteristics of Rococo style are elaborate ornamentation and decoration, asymmetrical design (unlike the strict symmetry of the Baroque period), lots of pastel colors, and curved or serpentine lines.

Since 1863 the Abbey has been home to a convent of Cistercian nuns, who run a boarding school for girls on the abbey grounds, as well as a guesthouse and a cafe.

(Some of the sisters of the Abbey!)

There are two things that you absolutely MUST see while at Waldsassen: the basilica and the abbey library.  If you have time, you should also see the abbey chapel.

Waldsassen is officially a basilica minor, meaning that it was recognized by Pope Paul VI in 1969 as a special church and given precedence over other churches.  This is the large church you see in the first photo above.  It is used for the town of Waldsassen and the surrounding area.

The interior of the basilica is stunning, as I hope you can see from the photos.

(The view from the front entrance, along the main aisle toward the altar.  All of the wooden pews on left and right are hand-carved!)

(Right above the main entrance is the large pipe organ.  Note the ceiling frescoes and the highly-decorated ceiling.)

(A close-up view of the organ, taken from the main altar area.) 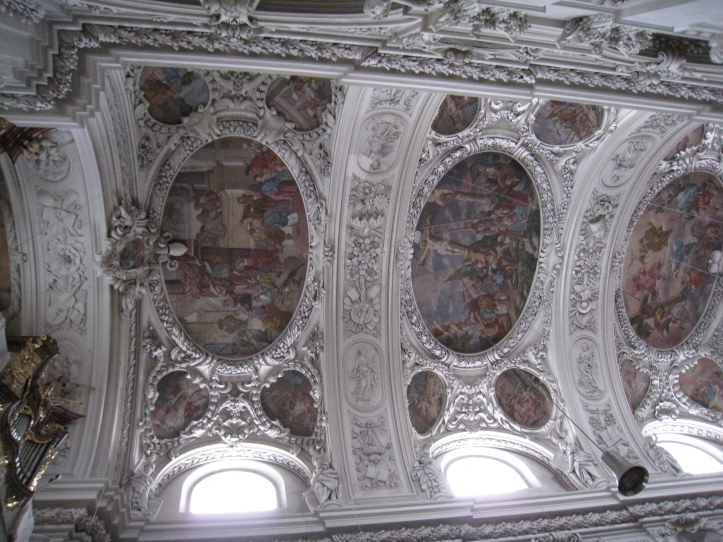 (Some of the ceiling frescoes with all those amazing decorations around them!) 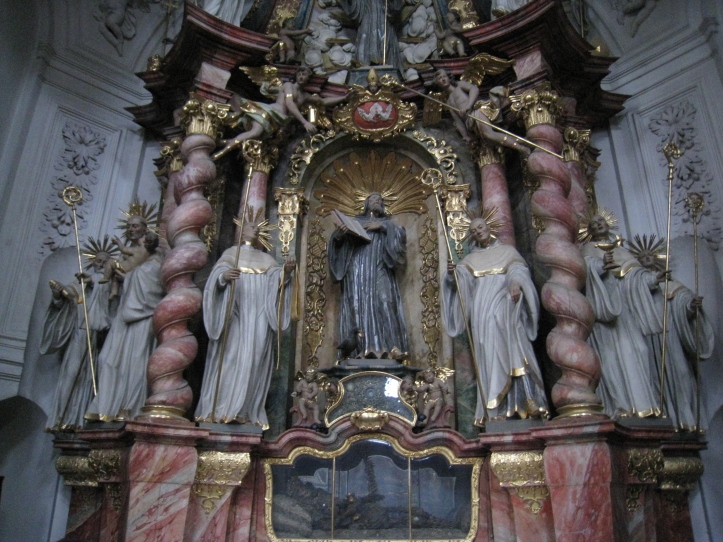 (One of the side altars in the basilica.  At the bottom center, you can see one of the reliquaries in the church.  And if it looks like gold, it IS gold!) 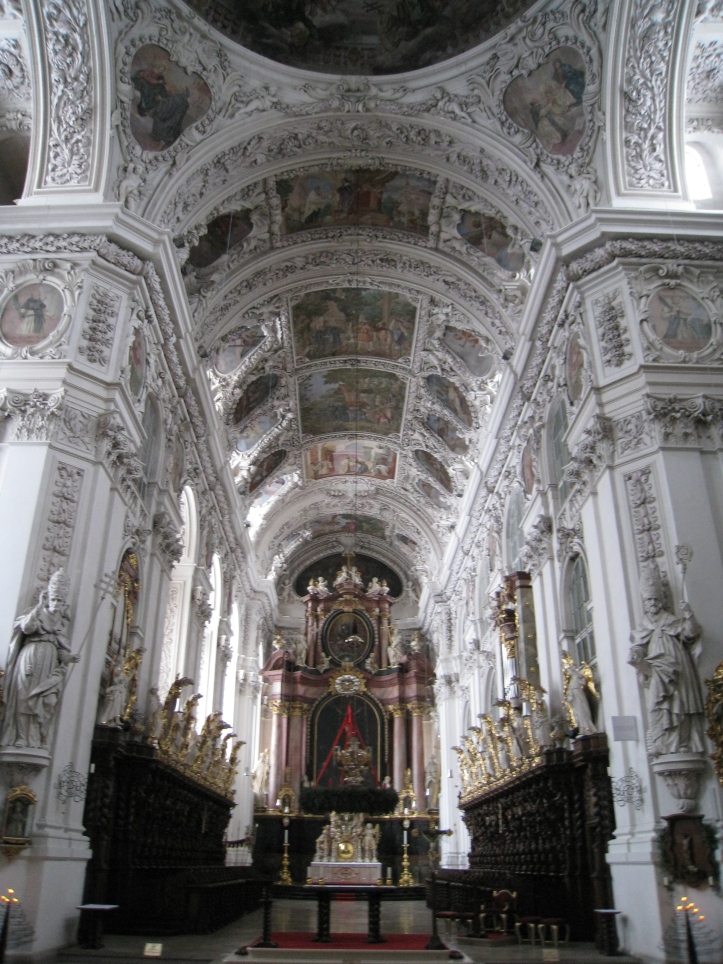 (Here’s a view of the choir area, the high altar, and the ceiling frescoes.)

(The altar, with the Advent wreath hanging above it [at Christmas time!])

The library was built in 1724-6.  If you’re a book person, you will love this place!  The floors are beautiful parquet, and you have to put on special covers over your shoes to protect the flooring.  The shelves (and everything else you see in here) were  intricately carved by hand and highly decorated.  There are thousands of books in here, bound in white pigskin and dark calfskin. For me one of the highlights are the ten carved columns that support the upper level.  These ten columns are carved in the shape of allegorical figures.  The represent human weaknesses like vanity, ignorance, pride, and boastfulness.  They were carved by a local artist named Karl Stilp in 1725.  The library also has a painted ceiling and ornamental plaster work.  There is a small admission fee to the library, but it’s worth it. 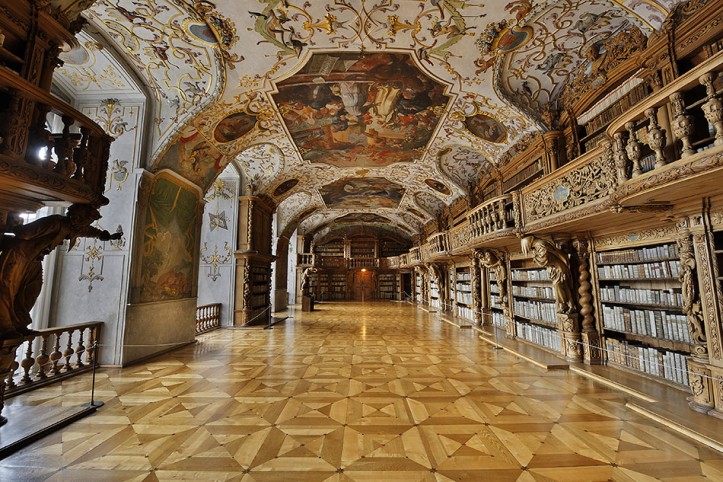 (View of the library from the entrance.) 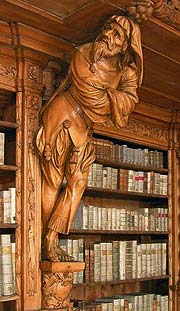 (A close-up of the statue, “Ignorance”.  It’s amazing when you stand next to it to realize that it was carved by hand.) 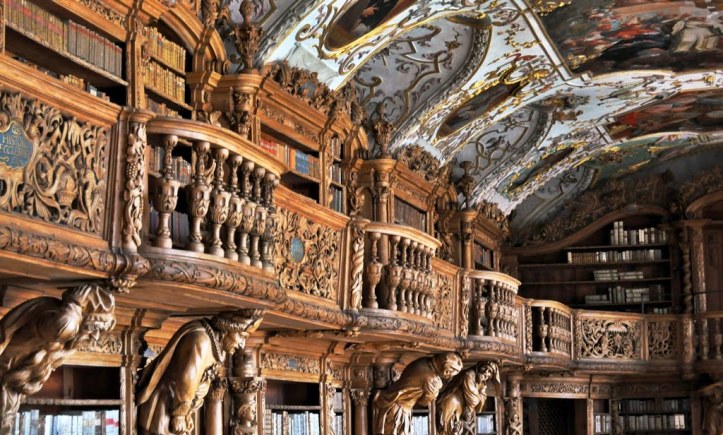 (Another view of some of the carved columns and the balustrade and second level above them.)

(The library is maintained by the nuns of the Cistercian Sisterhood.  Here’s one of the nuns shelving some books!)

If you have time, you should also visit the Abbey Chapel, which is where the sisters pray and attend Mass.  It’s not big, but it’s a peaceful place.

(The altar in the Abbey Chapel.)

(This beautiful hand-carved statue is in the corridor on the way to the Abbey Chapel.)

To close, here’s a really cool video of the Abbey from the air.  You’ll also see the “Kappl”, a small but beautiful chapel not far from Waldsassen.

I hope you’ve enjoyed your visit to Waldsassen Abbey.  It’s worth a trip!