I may not know art, but I know what I like: Baroque Art

The first thing to know is that art is like history: it’s divided into different “periods.”  In Part 1 (“I may not know art but I know what I like” [IMNKABIKWIL] Part 1) I talked about the earliest period in art history (Ancient Art).  In Part 2 I discussed Medieval Art.  Part 3 was all about Renaissance Art.  In this latest edition of IMNKABIKWIL, we’re going to check out the next period in art history:  Baroque Art.  As usual, we’ll look at what art was like during that period, and see some examples of art from the period.

Baroque Art is the art created between 1600-1725 or so.  The word “baroque” comes from the Portuguese word (barocco) for an irregularly-shaped pearl.  Many people in that era didn’t consider that baroque art was as good as the Renaissance art that came before it, so they used the word “baroque” to imply that it was inferior art.  You be the judge!

The main influences on the Baroque period of art were the Protestant Reformation and the Catholic Counter-Reformation that followed it.  Even now, you can often tell, when looking at a work from the Baroque period, whether it was painted by a Catholic or a Protestant painter: if it has a religious theme, it was likely (though not always) painted by a Catholic; if it’s a landscape or a portrait or a still life, the painter was probably Protestant.

There were several themes that feature in Baroque Art:

Landscapes were a popular theme in the Baroque period.  This first picture is an early work by French painter Claude Lorrain.  It is a landscape which features a classical theme: sort of a bridge between Renaissance and Baroque.

For me, the Dutch were the best landscape artists of the Baroque period, and the best of them was Jacob van Ruisdael.  Here’s one of my favorites, from the National Galleries of Scotland (which you can visit on your next trip to the Edinburgh Fringe Festival!)

(The Banks of a River, by Jacob van Ruisdael, 1649.  National Galleries of Scotland, Edinburgh UK.)

Seascapes were a popular theme in the Baroque period.  In this painting, you can see the ships all flying the Dutch flag: a form of patriotism that had been impossible 100 years before (when the Spanish controlled the Netherlands.)

(The Maas at Dordrecht, by Aelbert Cuyp, 1650.  National Gallery of Art, London UK)

Johannes Vermeer was a Dutch painter that lived in Delft, in the Netherlands.  This landscape is unusual in that, in the 17th century, it was rare to feature a city skyline in a painting.  I think it’s one of the most beautiful landscapes ever painted.

(View of Delft, by Johannes Vermeer, 1661.  Mauritshuis, The Hague, The Netherlands.)

Now let’s look at a few still life paintings.  A lot of people think still lifes are boring, but I find them fascinating.  You get a glimpse into what people ate and drank in the Baroque era, and you can see the kinds of things that they themselves found interesting.  And the detail in some of these paintings in insanely good! 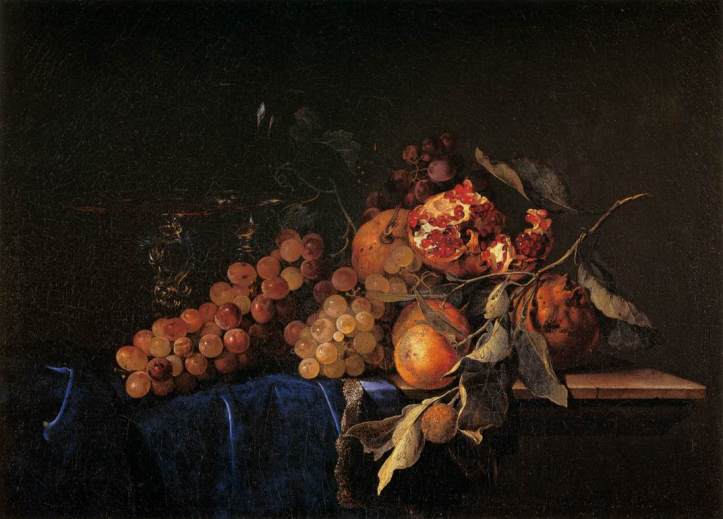 (Still-Life with an Aquamanile, Fruit, and a Nautilus Cup, by Willem Kalf, 1660.  Thyssen-Bornemisza Museum, Madrid, Spain)

Caravaggio is most famous for his use of chiaroscuro, but he did paint one still life.  The detail is impressive.

Chiaroscuro, the use of light and shade to increase the focus and drama of a painting, was a new development in art that came about during the Baroque period.  This technique was developed in Italy, and there were great Italian artists during this period.  For me, though, the master was Dutch: Rembrandt Harmenszoon van Rijn, known today simply as Rembrandt.  I consider him to be the Michelangelo of the Baroque era.

Here’s what is considered one of his greatest works.  It has several names, but I’m using the most common one:

Notice in that painting how the artist uses light to emphasize the main characters, with everything else in shadow.  The other thing you’ll notice if you ever get to see this in person is how BIG it is: nearly 12.5 feet (almost 4 meters) high and almost 15 feet (4.5 meters) wide!  The figures are basically life-size!

Caravaggio is one of the greatest of the Italian Baroque painters.  Here’s one of his paintings, from a most unlikely museum!

(St-John the Baptist in the Wilderness, by Caravaggio, 1605.   Nelson-Atkins Museum of Art, Kansas City MO, USA.)

Gerard [Gerrit] van Honthorst was a Dutch painter that studied in Rome and was greatly influenced by Caravaggio’s work.  His use of chiaroscuro apparently impressed the Italians: they gave him the nickname Gherardo delle Notti (“Gerard of the nights”).

(The Adoration of the Shepherds, by Gerard [or Gerrit] van Honthorst, 1622.  Wallraf-Richartz Museum, Köln [Cologne], Germany.)

This is my favorite of all of Rembrandt paintings, and getting to see it in person (finally!) was a great experience.  There is so much to see in this work: enjoy!

(The Sacrifice of Isaac, by Rembrandt, 1635.  The State Hermitage Museum, St-Petersburg, Russia.)

Portrait painting was a big part of thee Baroque period, and some of the most famous portraits ever painted came from this era.  Here are a few I’ve seen (and maybe you’ve seen them too!)

I think many people have seen this first one.  It’s a beautiful painting.

Johannes Vermeer only painted 39 pictures, and I’ve included two of them here (both to be found in the same museum.)  I love Vermeer.

An unusual feature of Baroque portraiture was the “triple portrait”, where three different perspectives of the same person are show in one picture.  These were often done so that a sculptor could then make a bust of the person in the painting.  Here are two of the most famous ones.

This next picture is essentially a group portrait, definitely done in a Caravaggio style (but much brighter!)  It was just purchased (2013) by the National Gallery of Art in Washington DC.

This next picture is an amazing portrait.  When  you stand in front of it, you almost feel like the man is right there too!

Self-portraits (the “selfies” of the Baroque age!) were very popular among artists.  Here are a couple of good ones! 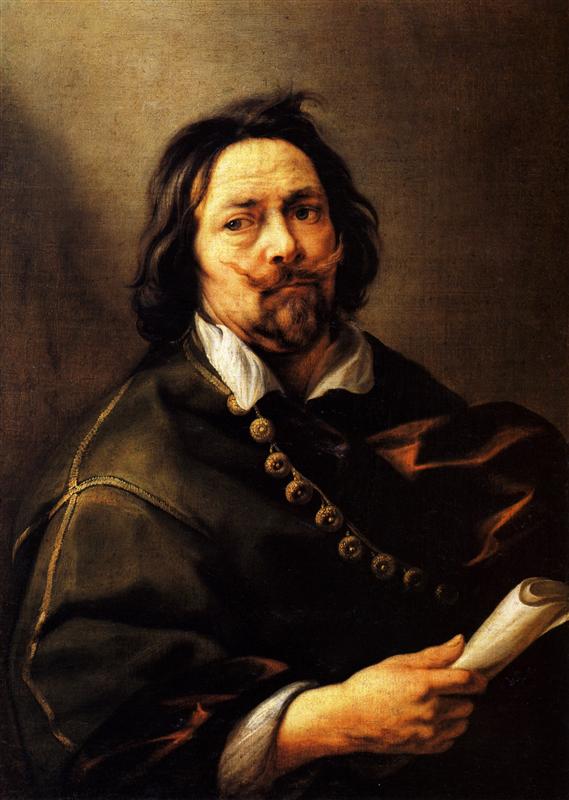 I thought I should put one more work by Velázquez in this post, so I chose one that fits in the “dramatic moment” category.  This painting was done to celebrate the Spanish victory at Breda (in the Netherlands) in 1625.  It is, to me, one of the best paintings of a victory that I have ever seen.  Velázquez knew the winning general, Spinola, personally, and so his painting gives real  historical accuracy to the painting (something you don’t usually see in such works.)

If you’ve read my other posts about art, you’ll know that I’m especially interested in seeing art that shows “regular” (i.e. not noble or rich) people.  I’ll close this post with several works from the Le Nain Brothers of Laon, in northern France.  The three brothers worked together on each other’s works, and only signed their paintings with their last name, so it’s hard to say who painted what.  But what I love about their work is that it depicts typical people of their time, dressed as typical people would have dressed.  Their works are a great “window” into the lives of such people.  Hope you like them!

I hope this short visit to the Baroque period of art history has been interesting to you.  You can find great art in lots of unlikely places, so get out there and experience it!