The People and Places of Cambodia

Cambodia is one of my favorite countries to visit.  The best way to give you an idea of how cool this place is to show you a lot of pictures of the people of Cambodia, how they live and work, and what their country is like.  I hope you enjoy the trip!

Very few people are friendlier than the people of Cambodia.  Everyone seems to smile, and not just because they want your money!  They’re just genuinely friendly. 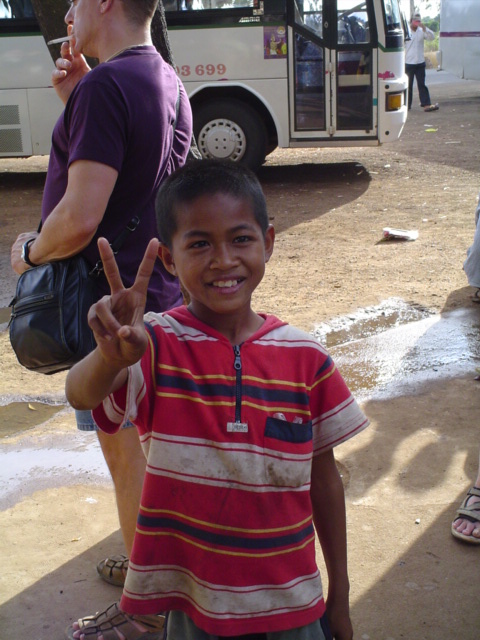 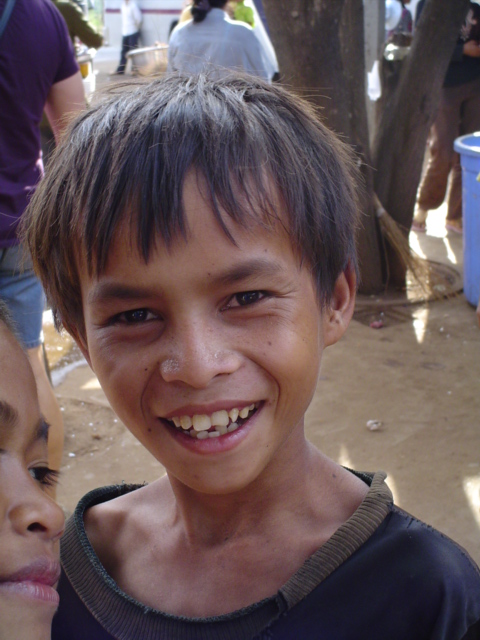 Cambodians are very proud of their country.  Here’s one of our tour guides, with the Cambodian flag.  (The monument on the flag is Angkor Wat, which we’ll talk about at the end of this post.)

This was another tour guide on a recent trip: he smiled the whole time!  When I asked him if he were happy all the time, he said, “Why not?”  That seems to be the way most Cambodians deal with life!

Cambodia is a world away from things that most of us take for granted.  Supermarkets?  Most Cambodians wouldn’t even know what that is.  But shopping for food can be a wonderful sensory experience here!

(Let’s do a little comparison shopping for pineapples!) 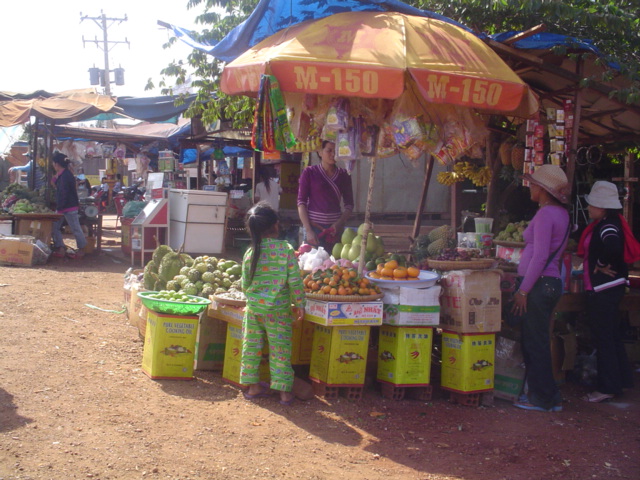 I had absolutely no idea what some of these fruits and vegetables were, but they sure looked good! 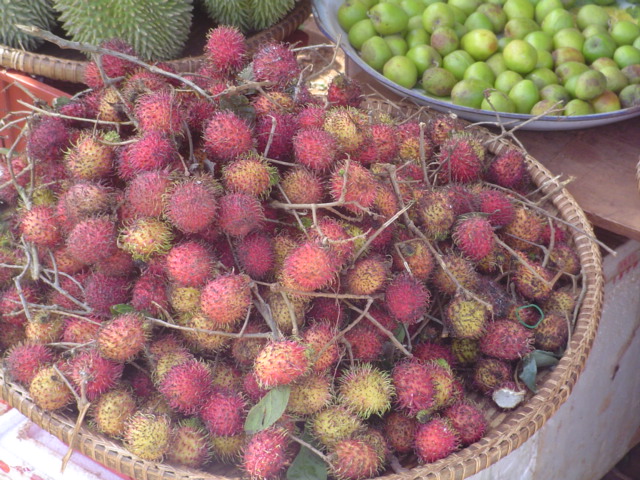 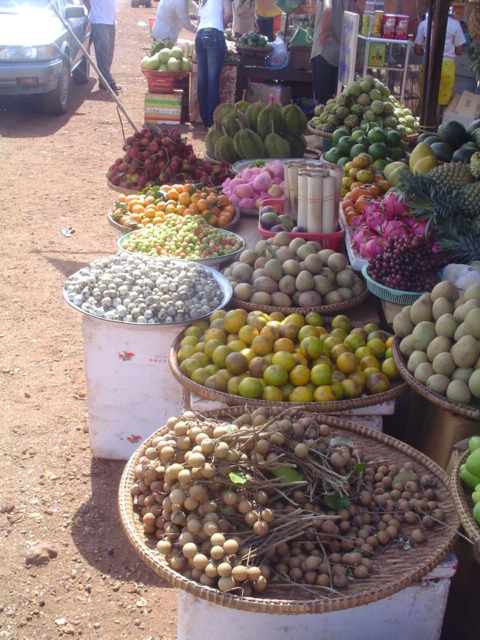 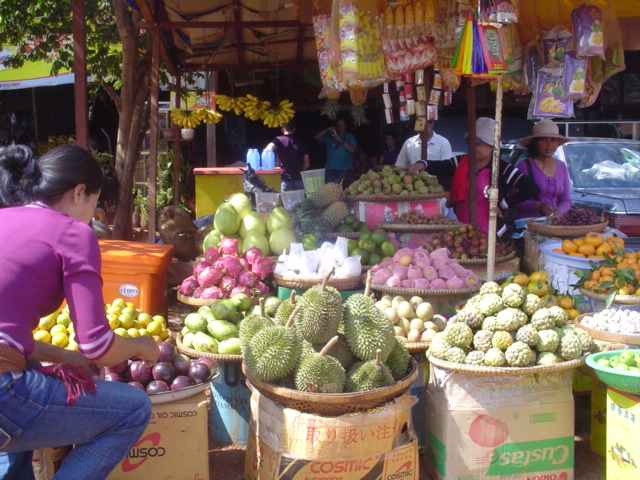 Because infrastructure in Cambodia isn’t well-developed, people have come up with creative ways to buy and sell the things they need.  How about this roadside stand, selling cabbages and kerosene?

Need gas for your motor scooter?  Not a problem!  Who needs a big fancy gas station?

Fish anyone?  Lots of river fish at really low prices.

Cambodia a very Buddhist country.  You see monks everywhere.  As you can see in the first picture, they don’t have a problem with modern technology. 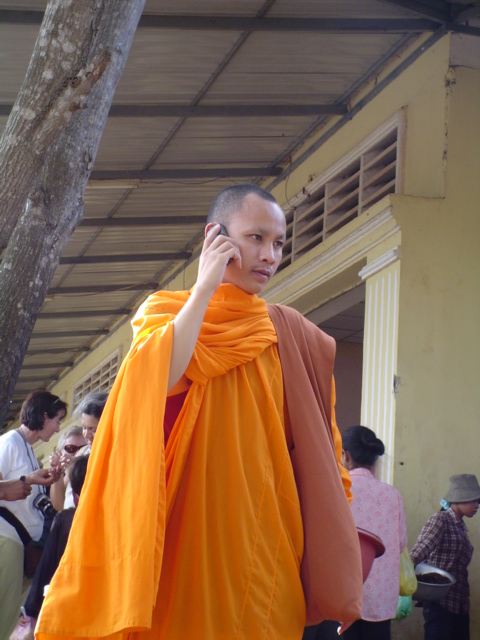 Here’s a picture of the Koh Trong temple at sunrise.

These next three pictures came from the Wat Phom Sambok Buddhist monastery.  Buddhist art is always interesting, but these are REALLY interesting! 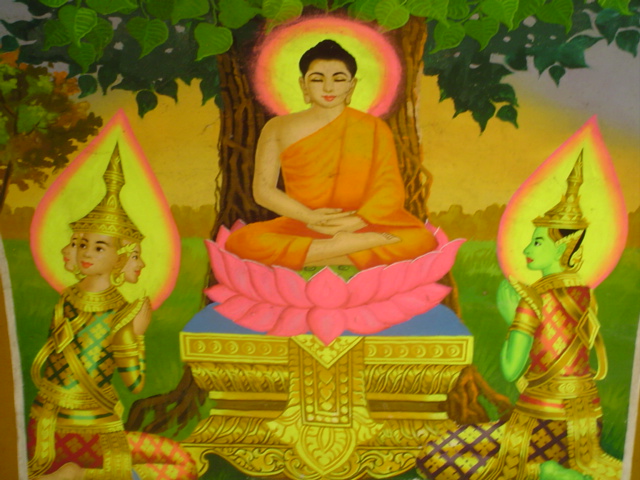 I saw this cat at the monastery.  Just goes to show: cats are the same everywhere!

As you may have noted from previous pictures, there are a lot of kids in Cambodia.  Here’s a family having ice cream on the steps of the Royal Palace in Phnom Penh. 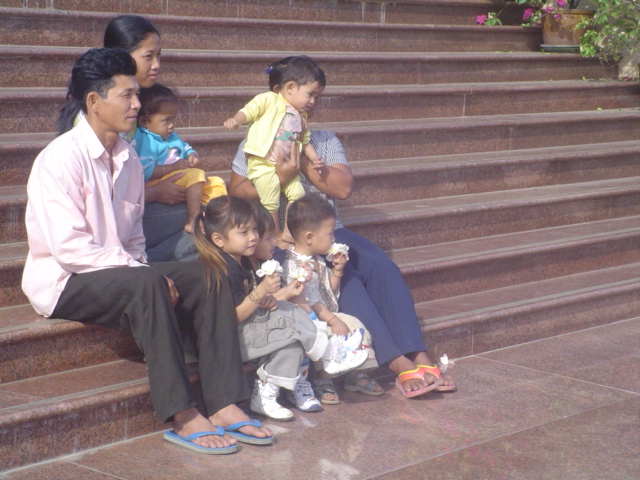 You’ll see methods of transport in Cambodia you won’t see  in any “Western” country.  I’ve never seen a large semi-truck to transport goods: instead, Cambodians use what they have to move things around. 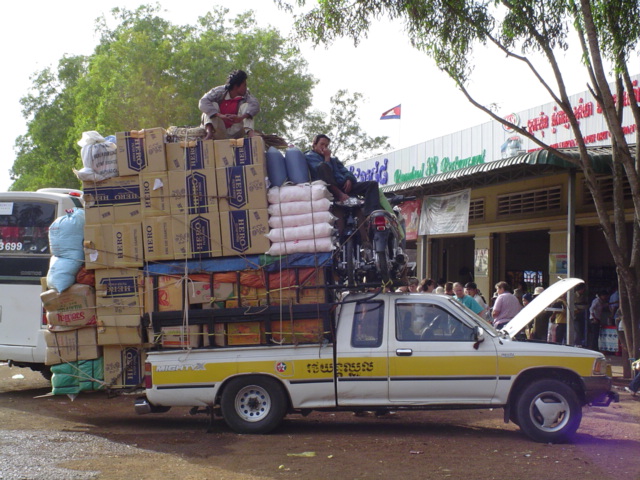 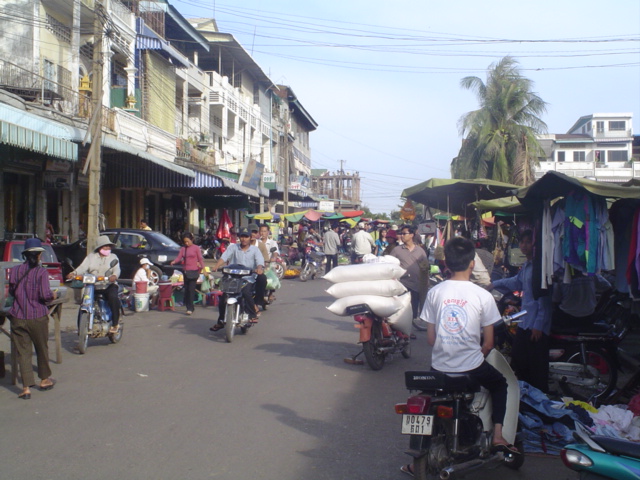 This guy sells everything FROM HIS BICYCLE!

Bringing the melon harvest to market! 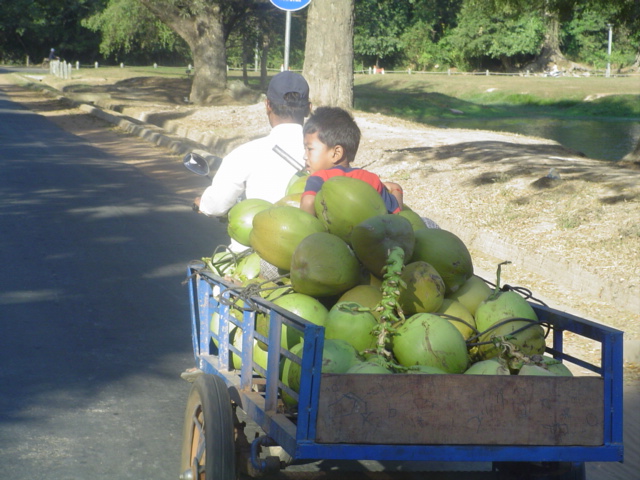 You may not find a bus, but there’s always someone’s pickup truck!

There’s no “theme” to this next picture: it just reminds me of how pretty Cambodia is!

Unemployment in Cambodia is high.  People find ways to earn a living.  Here’s a boy at a monastery (where you remove your shoes before you go in).  He’s created a job for himself: he collects the shoes from the visitors, keeps them organized, and (if the tourists are nice) collects a tip when they leave.  (See those white shoes?  They cost more than this boy will earn in several years……)

This was a man I appreciated a lot.  He was set up near one of the temples, playing traditional music on a home-made instrument.

Cambodian life and culture are very much dominated by its major river, theMekong.  Many people live on or along the river, and it is a major transportation highway for people and goods. 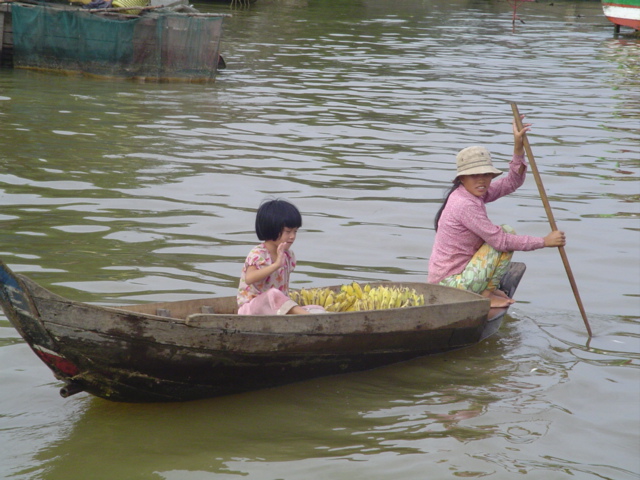 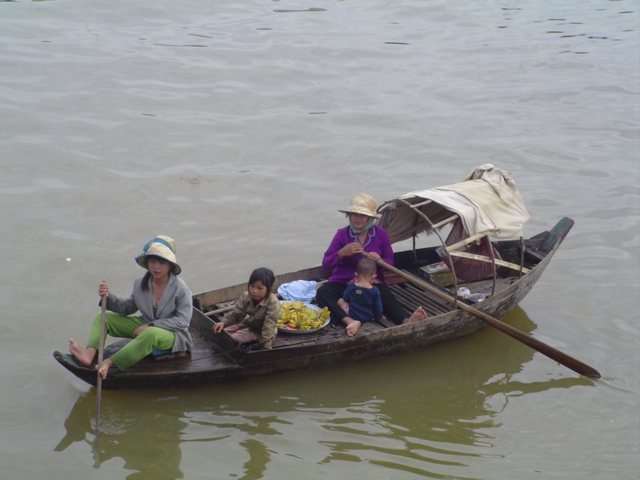 All along the river you find “floating villages” like this one.

The Mekong River is also one of the places where you can find the endangered Irrawaddy dolphin, a mammal that can live in the ocean as well as in freshwater rivers.

The dolphins are protected by Cambodian law, and the government works hard to keep them from going extinct.  If you visit the town of Kratie, you can go on a “dolphin-watching” tour.  Here are the boats that you take for the tour. 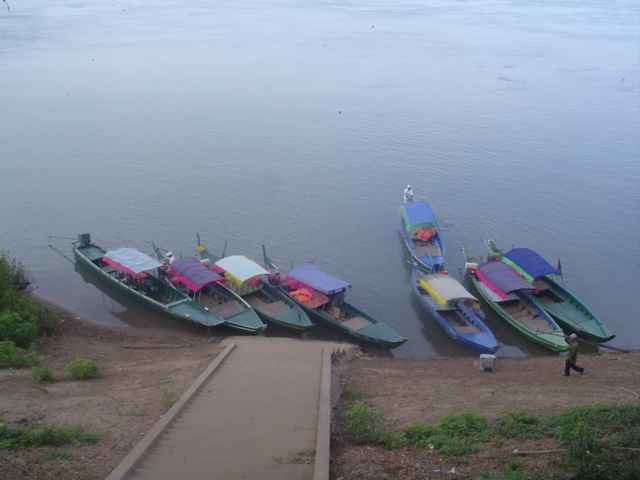 This young boy makes his living by carving dolphins out of wood and selling them to tourists.  Yes, I bought one: seeing those creatures in the river was really a great experience, and the little wooden dolphin reminds me of a great day. 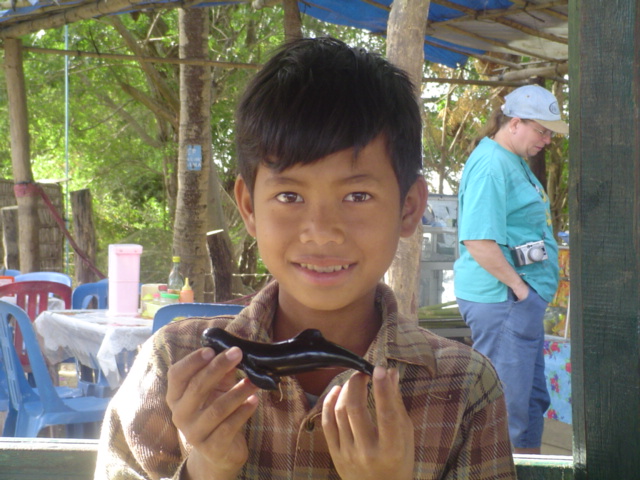 As mentioned earlier, Cambodia is a Buddhist country, but there are also some amazing Hindu temples.  These next photos are from Banteay Srei, built in the 10th century, and dedicated to the god Shiva.  It was built from red sandstone, and the carvings are incredibly detailed.  It’s hard to believe they are over 1,000 years old! 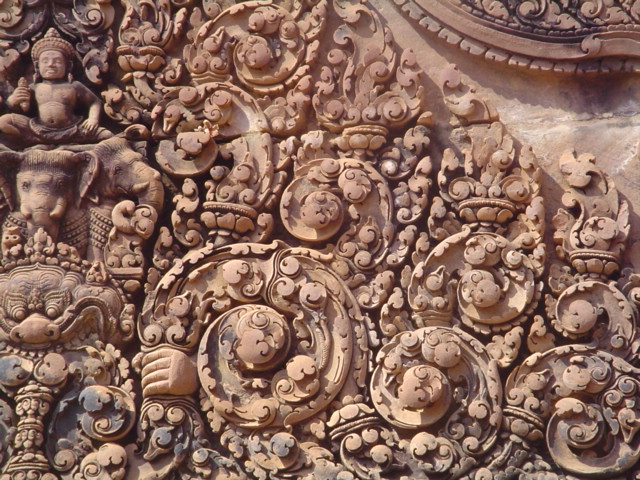 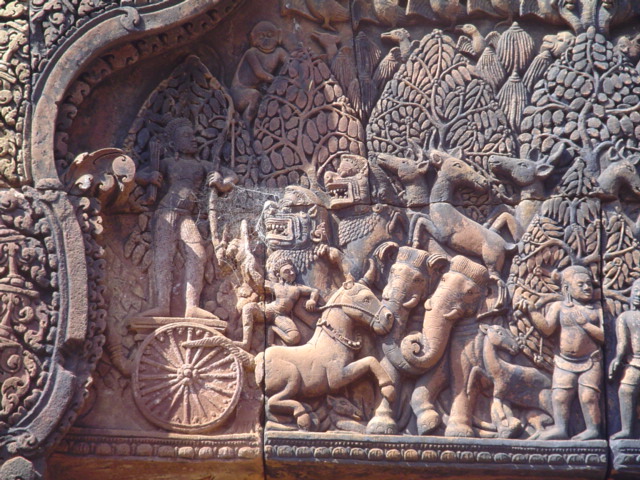 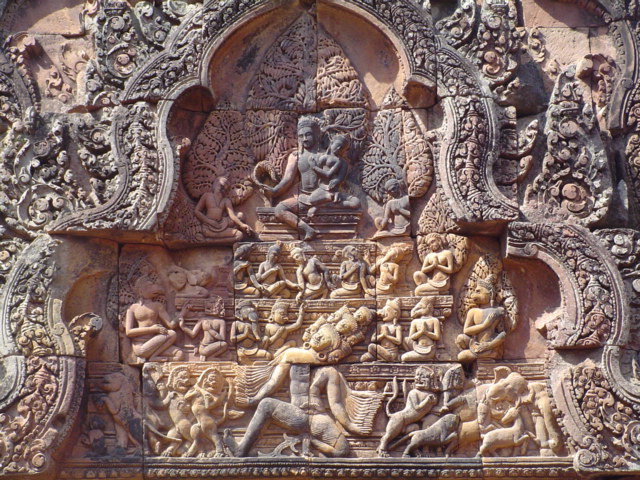 If you’ve heard of anything in Cambodia, you’ve probably heard of Angkor Wat, the largest religious monument in the world and a UNESCO World Heritage site.  Originally built as a Hindu temple, it soon became a whole complex of Buddhist temples spread across a wide area. 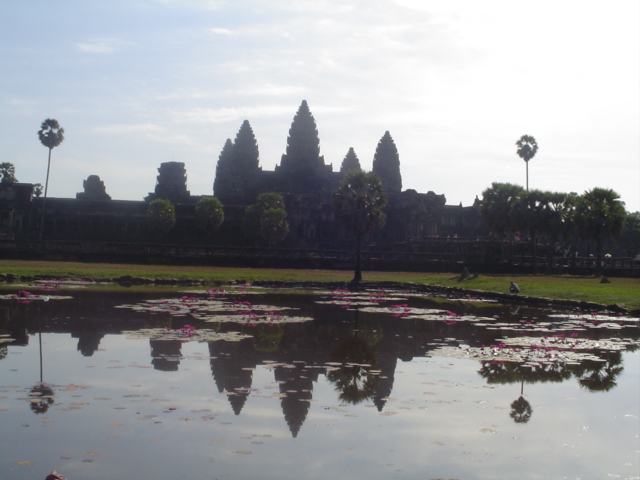 Angkor Wat is one of those places that, no matter how much hype, exceeds your expectations.  It will take your breath away.  Here’s a picture of one of the wall reliefs inside the main temple area.

Many of the temples at Angkor Wat were abandoned many centuries ago, and not “rediscovered” until the 1900s.  As a result, you can see where the jungle has claimed some of the areas. 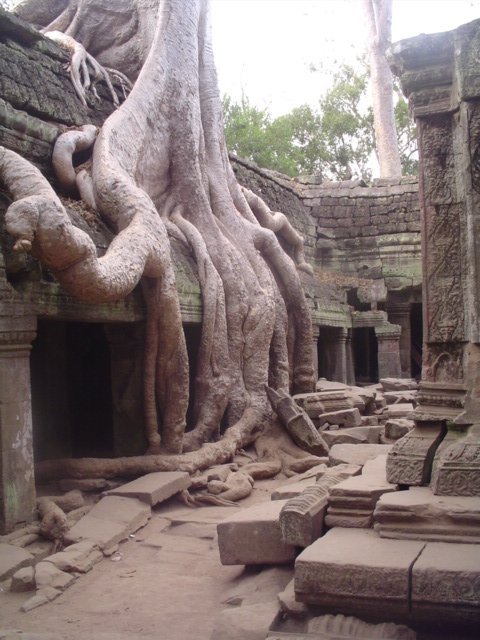 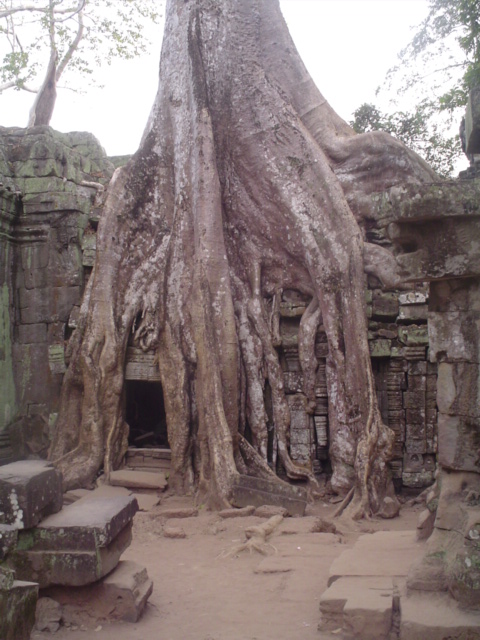 Cambodia is a country that moves at a slower pace.  It’s a place where you can find peace and calm.  And should you need a nap, you’ll find hammocks strung up in nearly every town and village: just lie back and relax! 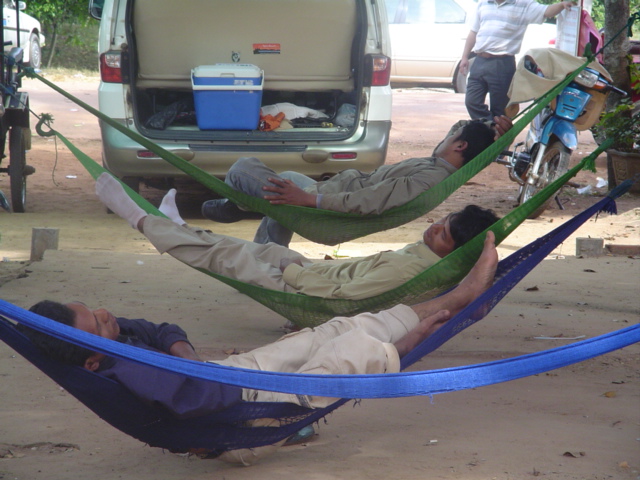 I hope you’ve enjoyed the pictorial tour of Cambodia.  If ever you get the chance, go visit!