The Imperial Cities of Morocco: Fez

This is the first of a 3-part series on the Imperial Cities of Morocco.  They get this name because all of them have been, at different times, capital of the country.  (There are actually four “imperial cities”, but I’ve only been to 3 of them: I’ve missed Rabat, the current capital!)

The oldest imperial city is Fez, first established as capital in the ninth century under Sultan Idriss II, a great-great grandson of the Prophet Muhammad.  (The current king, Mohammed VI, is also a direct descendant of Muhammad.)

Fez is really three towns in one. The oldest part, and the heart of the city, is Fez el- Bali, the medieval city, also called the medina (UNESCO World Heritage Site).  Half of the city’s population still live here: this is the part that most visitors come to see.  The second part is Fez el-Jedid, which means the “new city” (although “new” in Fez means late-13th century!)   This is where you’ll find the Mellah (the old Jewish quarter). The third part of Fez is the modern ville nouvelle (New City), which was built by the French during their occupation of Morocco (1912-1955).  You can skip this part of town: there’s literally nothing of interest here.

I’m going to focus on the medina, the oldest part of Fez.  It’s the part that I’ve visited the most, and where most tourists will spend their time.

The medina is completely surround by medieval walls, that are over 10 miles in length.  Even if you’ve visited other walled cities, the medina walls here are worth more than a glance.  Here are a couple of views of the walls. 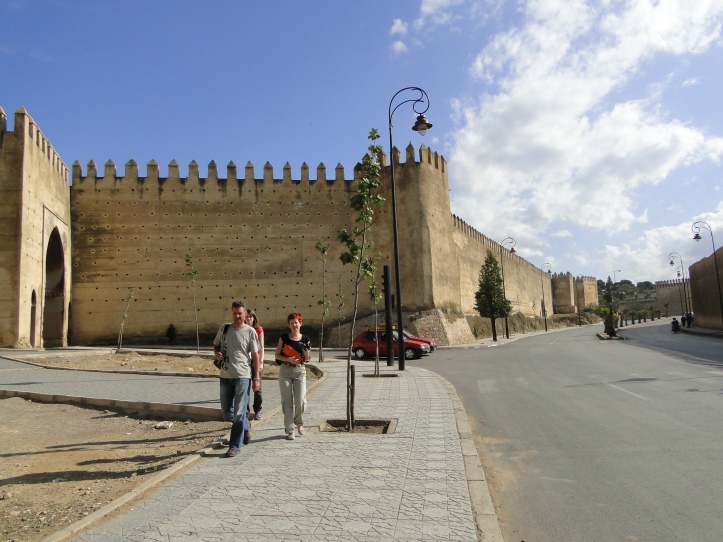 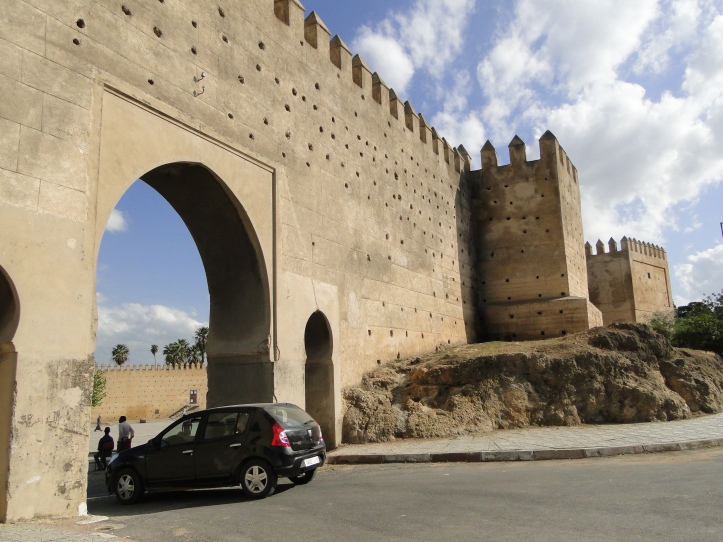 Some of the most beautiful parts of the medina are the old gates (bab in Arabic).  Here’s my favorite, the Bab Boujloud (also called Bou Jeloud).  This picture was taken from el-Jedid, the “new” (13th century) part of town, looking into el-Bali.  In the background, through the central arch, you can see the Madrassa Bou Inania (which I’ll come to shortly!) 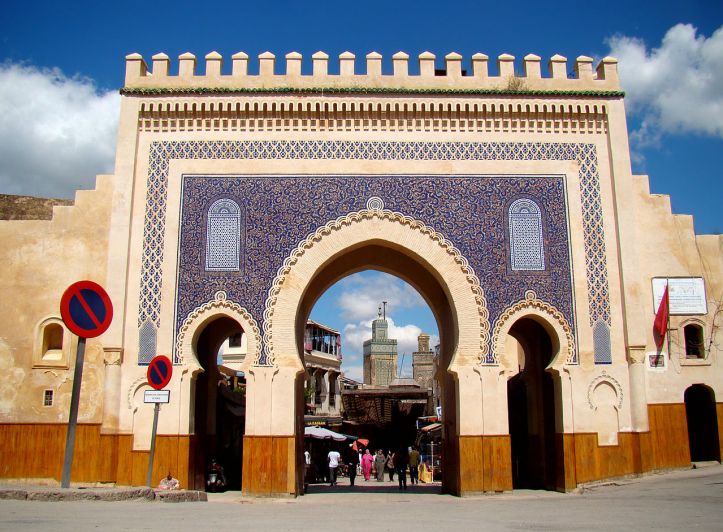 The Al-Karaouine Mosque was founded by Fatima al-Fihri (a woman originally from Tunisia), in the year 859.  She also founded a school (madrassa) which became one of the most important spiritual and educational centers of the entire Muslim world.  Non-Muslims aren’t allowed to enter the prayer area, but you can visit the outer courtyard, which is beautiful.  The tile work alone is worth the visit! 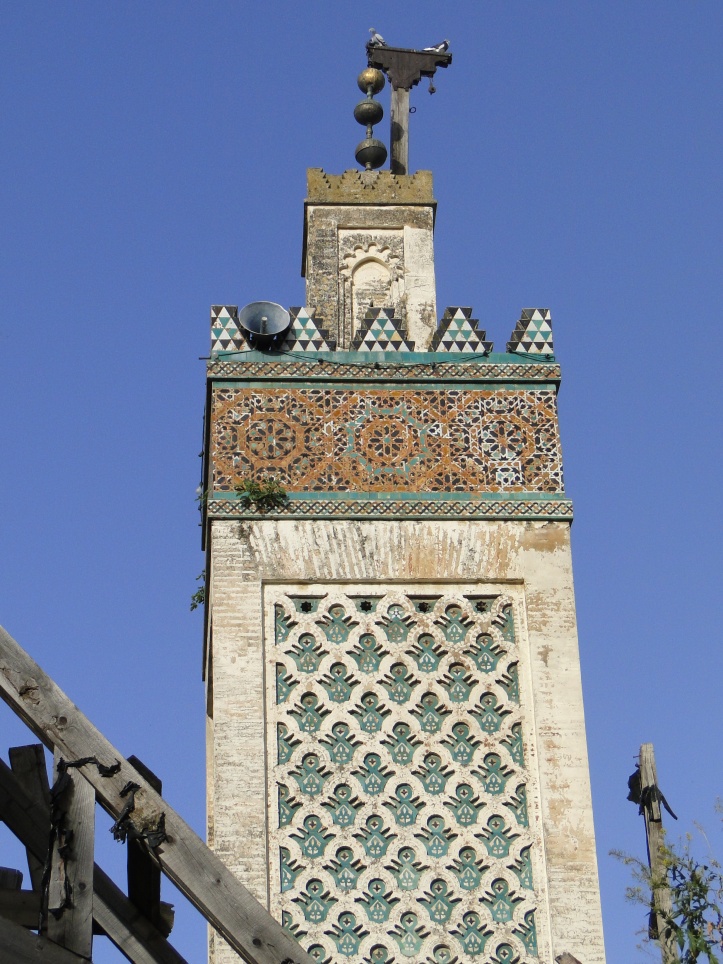 (A view of the minaret of Al-Karaouine Mosque, with a good view of tile work that is over 1200 years old!) 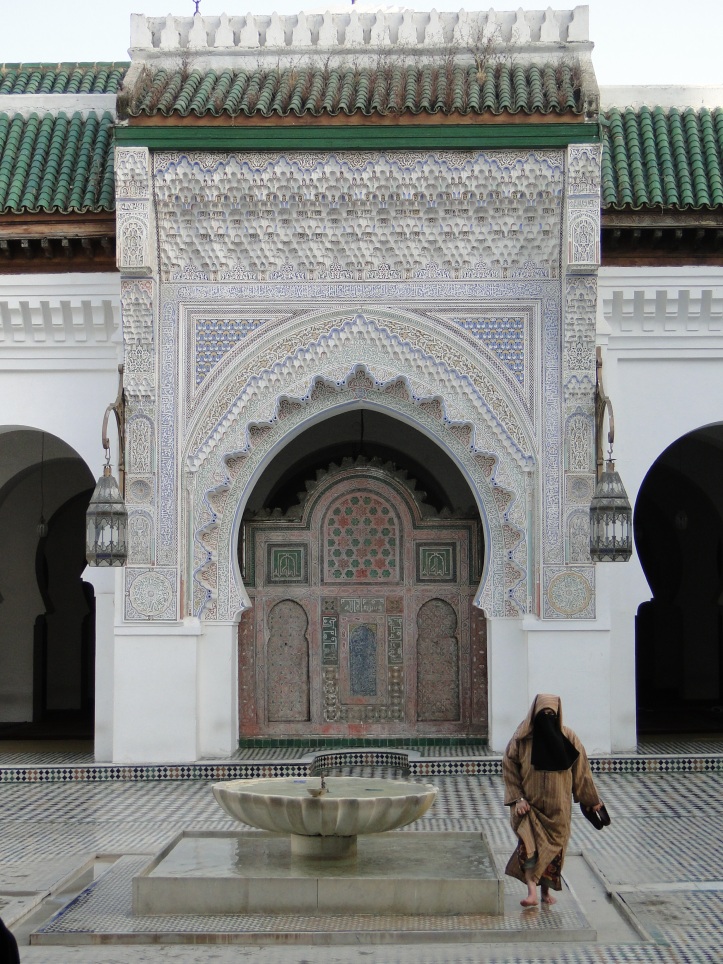 (A view of the outer courtyard of Al-Karaouine Mosque.) 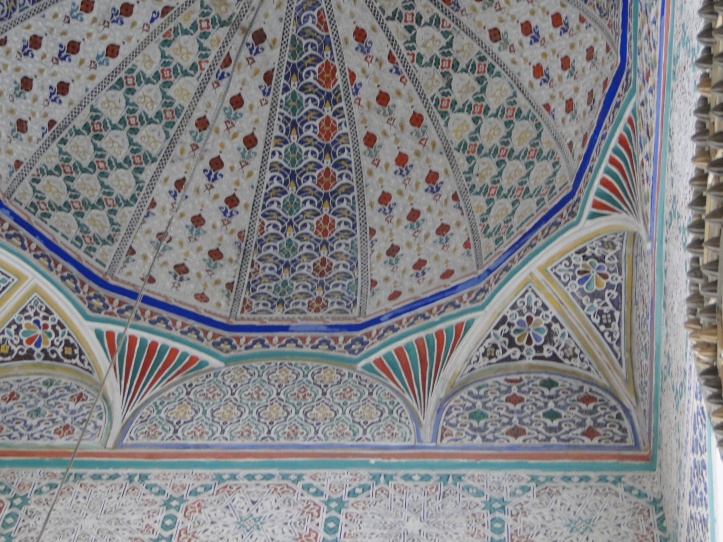 One of the greatest accomplishments of classical Islamic art is the quality of their tile work.  Since Islam prohibits the depiction of human or animal forms, Muslim artists became expert in the use of geometric designs.  You can see some of that here, in this picture from Al-Karaouine’s outer courtyard. 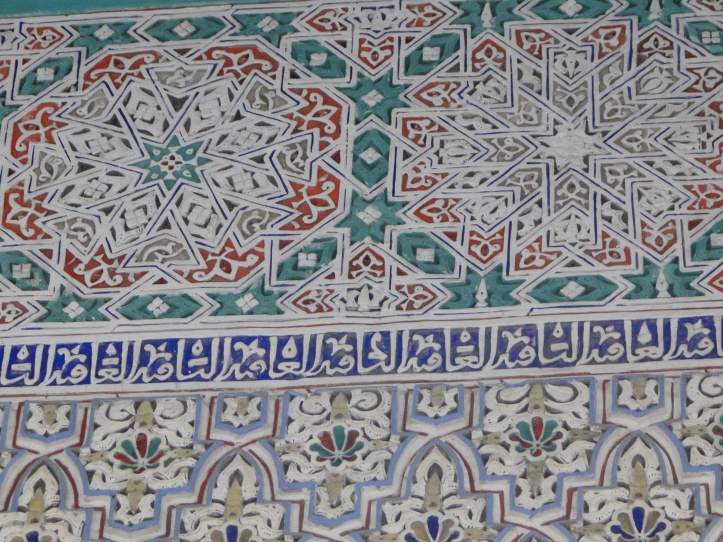 (Close-up of tile work in the outer courtyard of Al-Karaouine Mosque.  Hard to believe that some of this is well over 1,000 years old!) 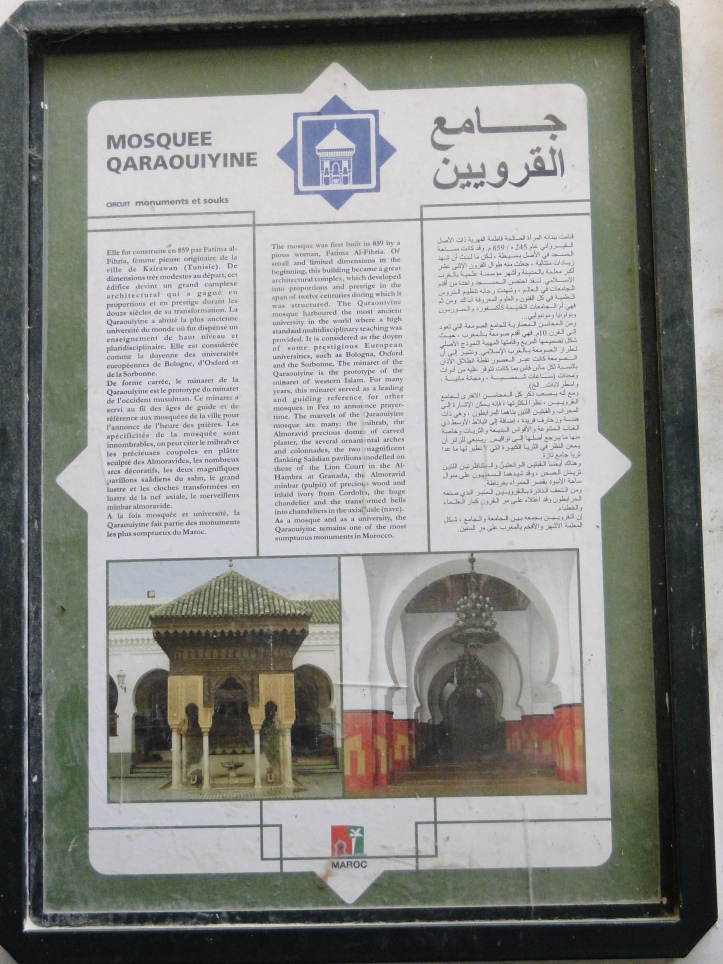 (This is the information plaque outside the mosque: it’s in French, English and Arabic, and gives lots of history about the building.)

Sometimes people ask me which sites in a place are on the UNESCO World Heritage Sites list.  For Fez, that’s easy: it ‘s the WHOLE MEDINA!  But certainly, one of the places that helped put the medina of Fez on that list is the madrassa of Bou Inania.  This religious school was built between 1351-1357.  It is open to non-Muslims, and is just a short walk from the Bab Boujloud.  The courtyards are gorgeous: beautiful tile work and even more impressive woodwork! 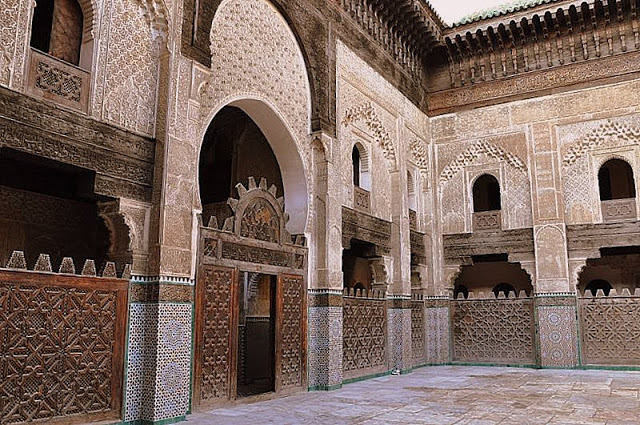 These are all beautiful places, but for me, the best part of Fez are the souks, those amazing medieval open-air shopping areas.  Most old cities in the Islamic world have souks or bazaars, but the markets in Fez are special.  My favorite thing to do in Fez is to just get lost in the souks!  It’s not hard to do, believe me.  But here’s a secret for you: you’re never really lost, because there’s always someone that knows where you are.  Who,  you wonder?  Well, in my experience, it’s usually a boy or young man, between 12-18, who always seems to know where the tourists are.  They always seem to recognize when you’re lost, and they’ll usually approach you and offer to “guide” you around.  Never say no to them!  Not only will they be able to take you anywhere in the city you need to go (like back to your hotel!) but they really can show you around, and take you to shops that you might never have found on your own.  Of course they are looking for a nice tip for this service, but it is always worth it.

The last time I was in Fez, I’d spent several hours doing what I love best: wandering around, with no particular aim or plan.  But as the afternoon wore on, I realized that I was truly lost, and I was getting tired.  I sat down to have a drink of water, and in less than a minute, a kid about  14 years old approached me, and asked if I wanted a guide.  We spent the next couple of hours wandering some more, and when I was ready, he took me right back to my hotel (which was not easy to find.)  I gave him the equivalent of $5, and you would have thought, from his reaction, that it was the best day of his life!  (I actually wanted to give him $20, because that’s what his services were worth to me, but he absolutely refused!  It was fun having an Arab bartering ME down from a price!)

Here are some pictures of the souks of Fez. 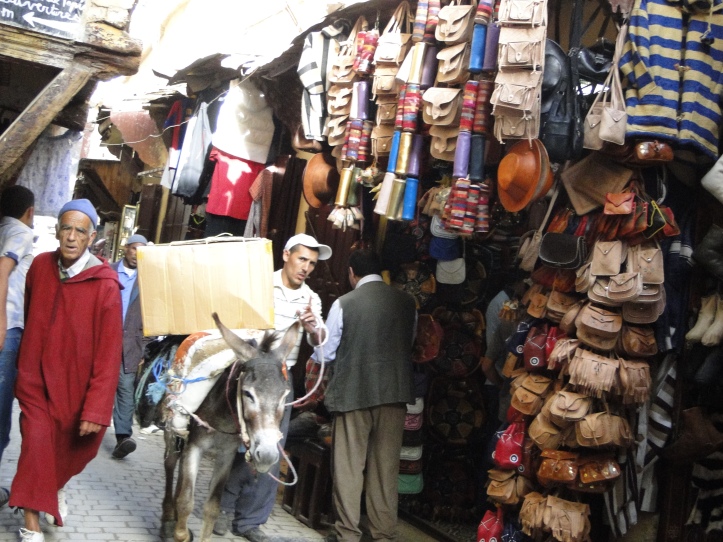 (The streets in the souk are narrow, so everything gets delivered by handcart or donkey!  Notice the man on the left, with the traditional hooded djellaba.  They were wearing these long before Obi-won-Kenobi!  (By the way, much of the original Star Wars trilogy was filmed in Morocco: I wonder if George Lucas got some of his costume inspiration from men like this?) 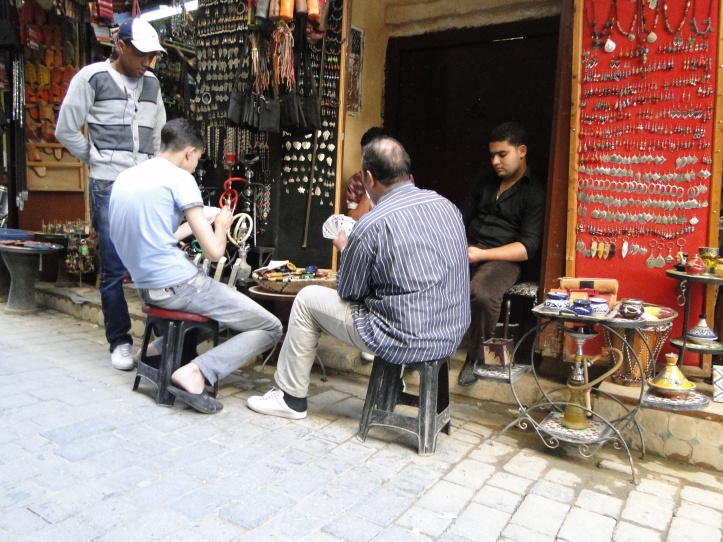 (Men being traditionally men: playing cards!  You see this all over the souk.  Notice the hookah pipe on the right.) 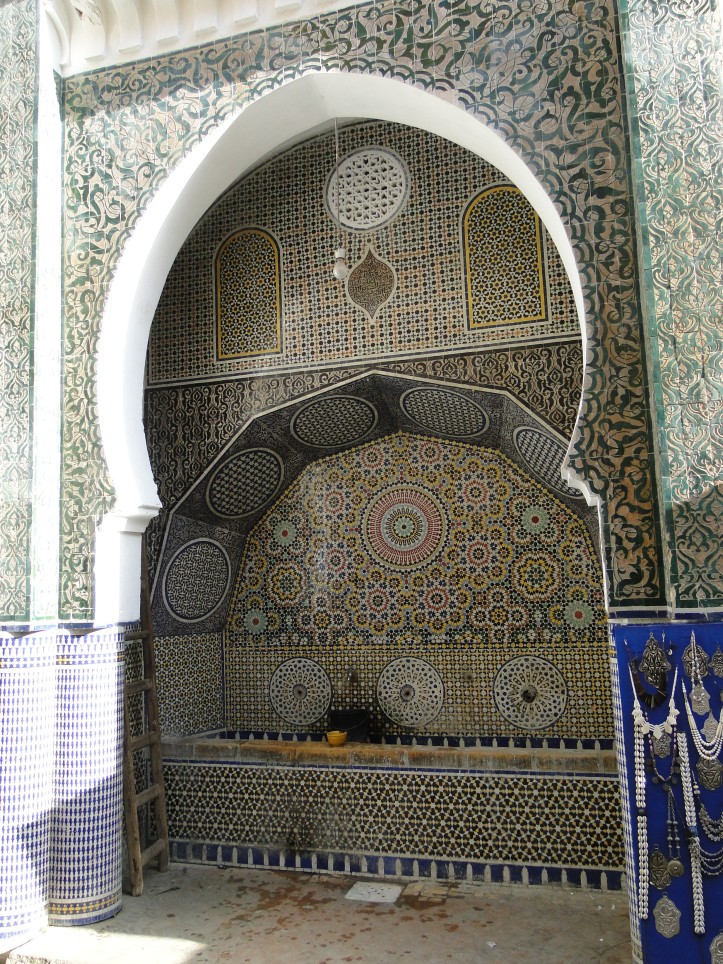 (Water fountain in the souk: a bit fancier than you’d see in your typical shopping mall, eh?) 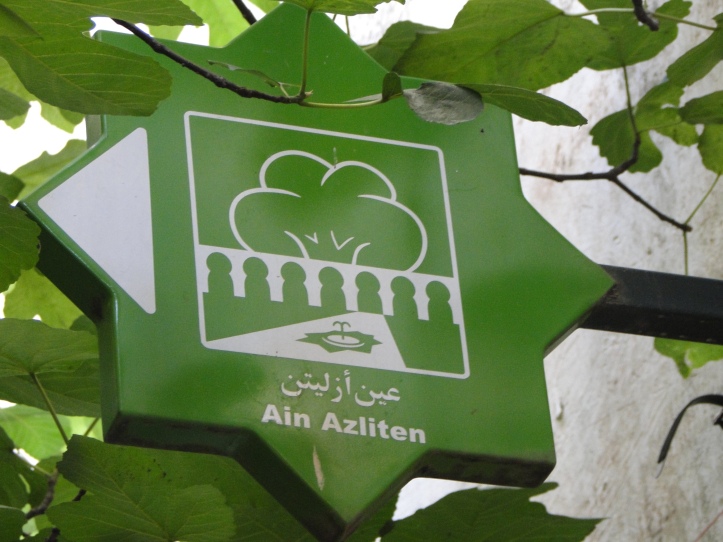 (Unlike most Middle Eastern souks, in Fez there are actually signs that direct you to different areas and help you find your way.  And they’re in Arabic AND English!  Of course, they are only found on the major streets of the souk, so if you get lost, the first thing you’ve got to do is find one of those streets!) 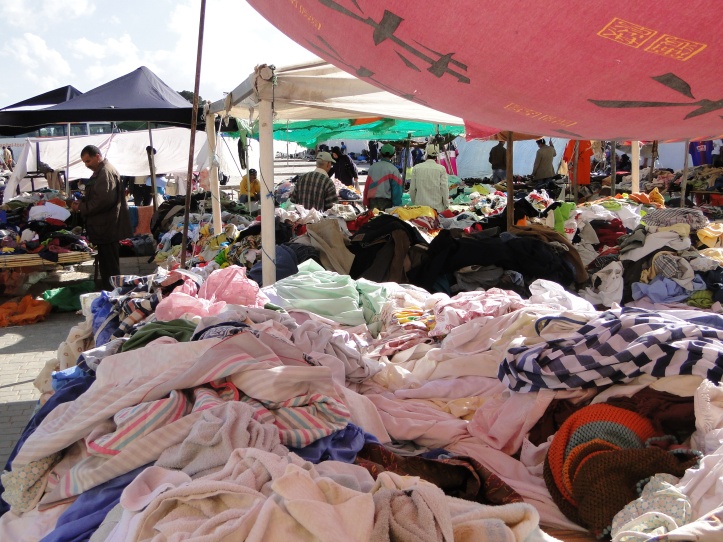 (In the souk, clothing sales are pretty basic….) 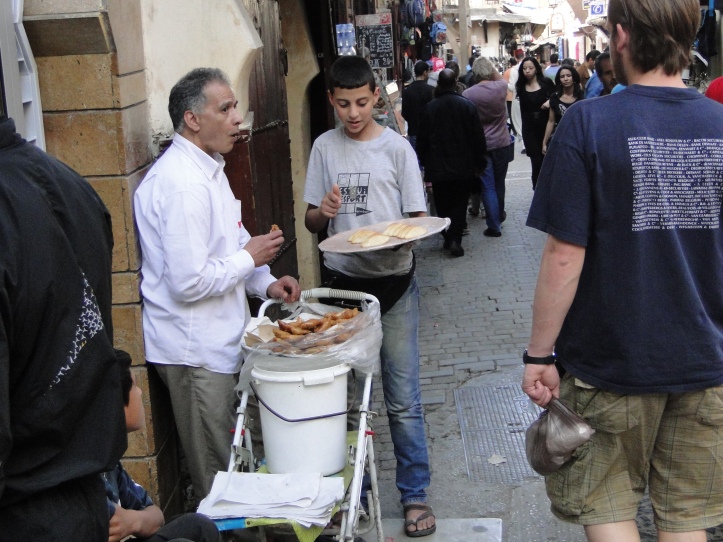 (This is fast-food, Moroccan style!  Young boys deliver food from restaurants in the souk to vendors and customers alike.  Medieval street food!)

I have one regret about all my trips to Morocco: I haven’t yet bought a djellaba.  I’m going to have to go back, and make sure I get one! 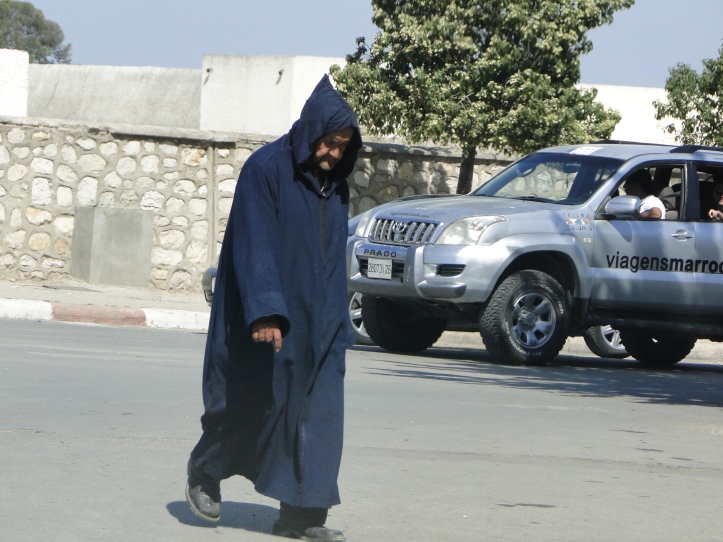 In my next post of the Imperial Cities of Morocco, I’ll tell you about the city of Meknes.  Hope you’ll join me for that!