I may not know art, but I know what I like: Medieval Art

The first thing to know is that art is like history: it’s divided into different “periods.”  In Part 1 (“I may not know art but I know what I like Part 1) I talked about the earliest period in art history (Ancient Art).  So now let’s talk about the next period:  Medieval Art.  We’ll look at what art was like during that period, and see some examples of art from the period.

Medieval art was influenced by three forces: the classical world of the Roman Empire, Christianity, and so-called “barbarian art” (art produced by non-Christian peoples like the Celts).  Most of the art we have from the medieval world, especially from 500-1000 AD, consists of sculptures, illuminated manuscripts, stained g;ass, metalwork, and mosaics.  Art from this period tends to focus on religious subjects, figures from the classical world (Roman and Greek).  Like Ancient Art, Medieval Art does feature rulers (kings, queens, emperors, other nobility) but interestingly, they are often shown in the company of Christianity’s gods: Jesus, Mary, the saints, and so on.  Regular (i.e. “common”) people are almost never seen in medieval art, except as participants in large battle scenes and things like that.  They are never shown as the focal point of medieval art.

Before I get into the art of the period, I want to say a bit about the architecture.  Medieval architecture began with the Romanesque style.  This style gets its name from the influence of Roman architecture, especially in its use of semi-circular (round) arches.  It is known for its massive quality, thick walls, and heavy pillars.  Windows were generally small and few in number, because the walls had to be so thick to support the roof. 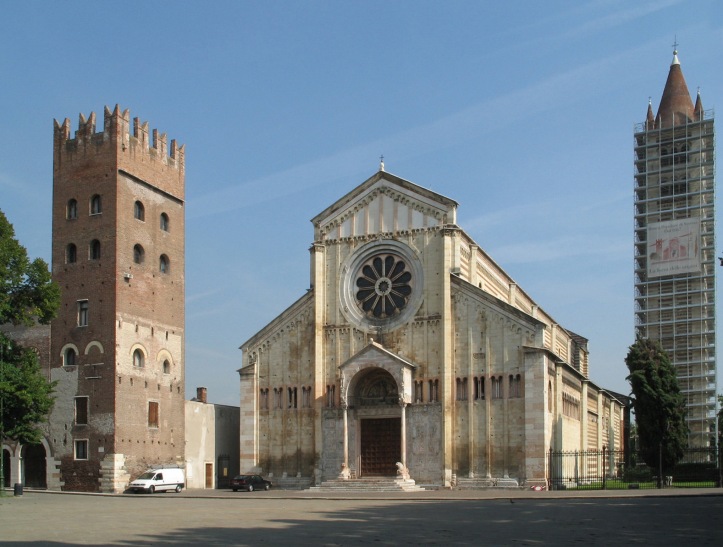 (Basilica of San Zeno Maggiore, in Verona, Italy, begun in 1045 AD, in the Romanesque style)

The Gothic style of architecture was (for the time) a radical departure from Romanesque.   Instead of the circular arch, Gothic used a pointed arch.  The new arch meant that buildings could be built much higher.  The joint vaulting of the Romaneque was replaced with ribbed vaulting, which allowed for wider buildings.  And perhaps the most recognizable element of Gothic architecture was the flying buttress.  These arched supports on the sides and backs of buildings, developed during the construction of Notre-Dame Cathedral in Paris, allowed medieval builders to create higher, airier building,s with large windows that filled the building with light. 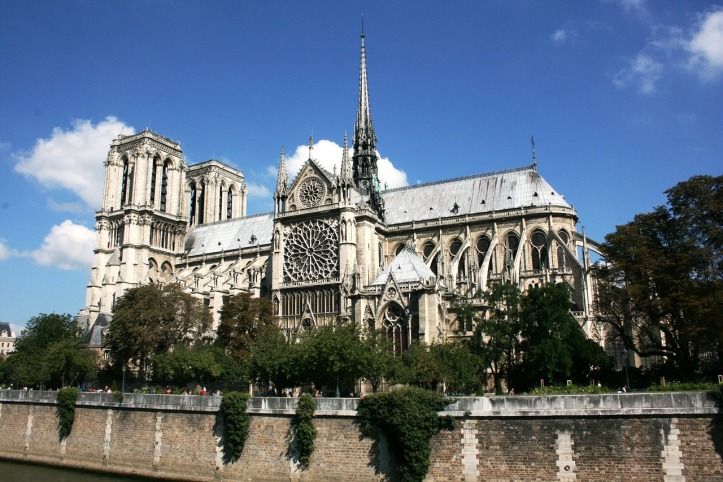 (Notre-Dame Cathedral in Paris, begun in 1160 and completed in 1345.  Notice the flying buttresses!)

And now, let’s look at some of the art from the medieval period.

Here are some things I’ve seen in museums. 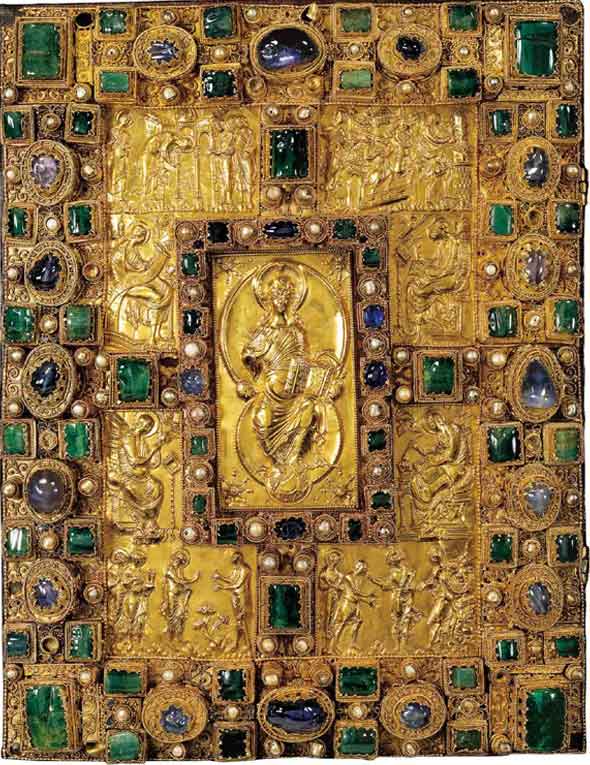 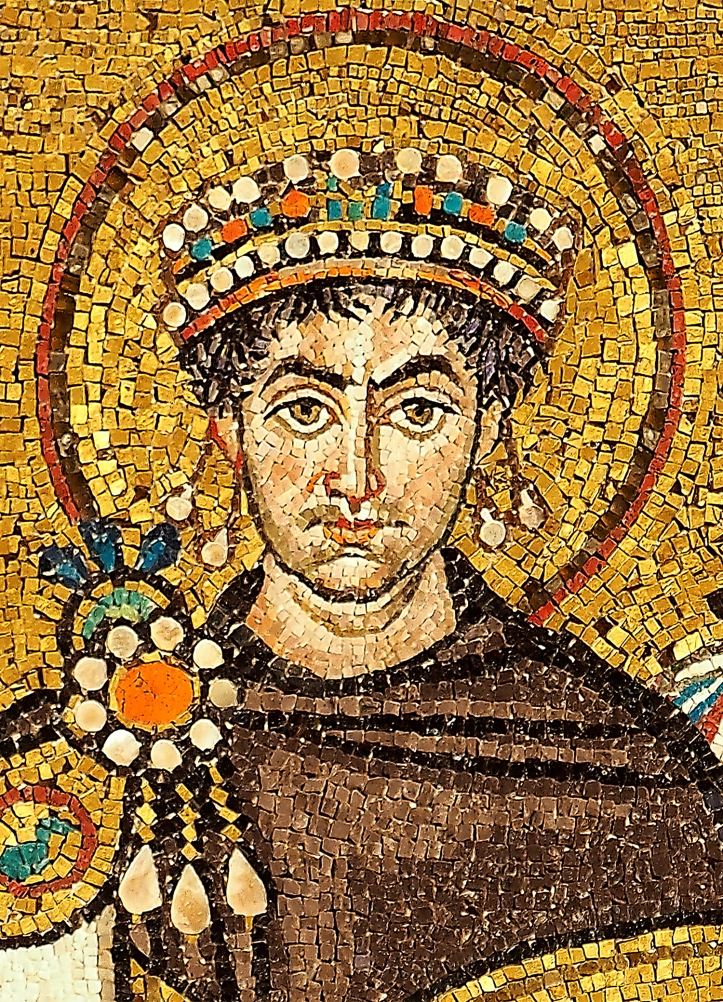 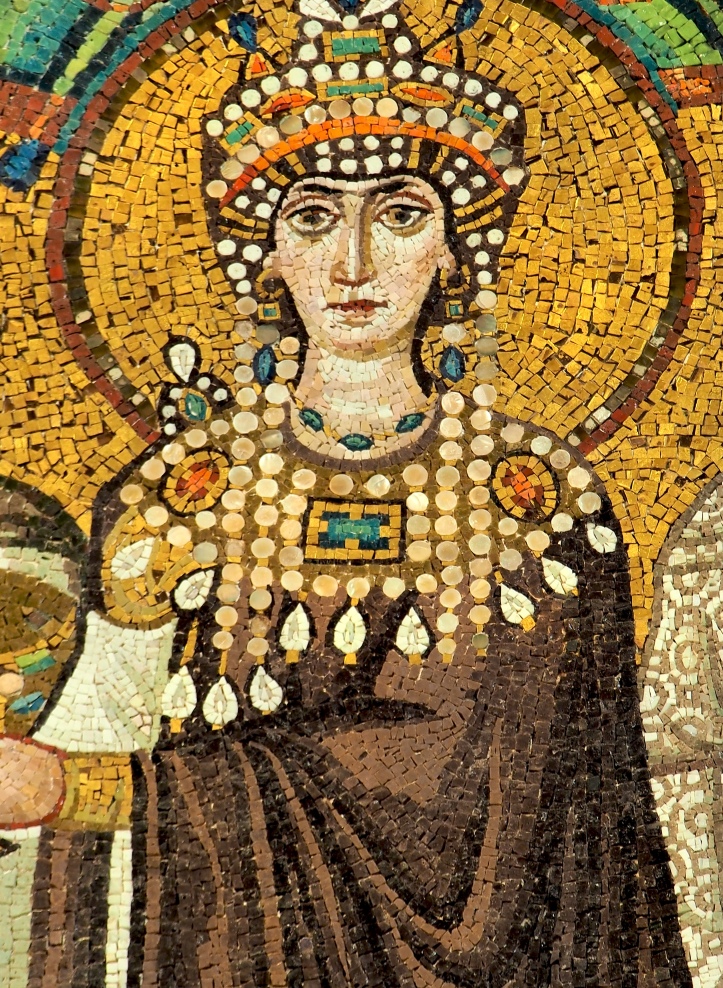 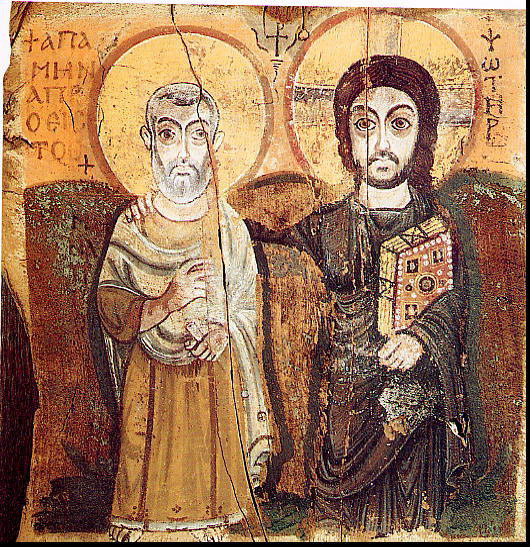 The Book of Kells is Ireland’s national treasure.  It is a manuscript containing the Four Gospels of the Bible’s New Testament, and has some of best illuminations found in any medieval work.  It was created around 800 AD by the monks of the monastery of St-Columba in Ireland.  The art combins traditional Christian painting with the very stylized art of the Celts: figures of humans, animals and mythical beasts, Celtic knots, and amazing patterns in bright colors.  This picture of the Virgin Mary and the Baby Jesus is the oldest known image of Mary in a Western manuscript. 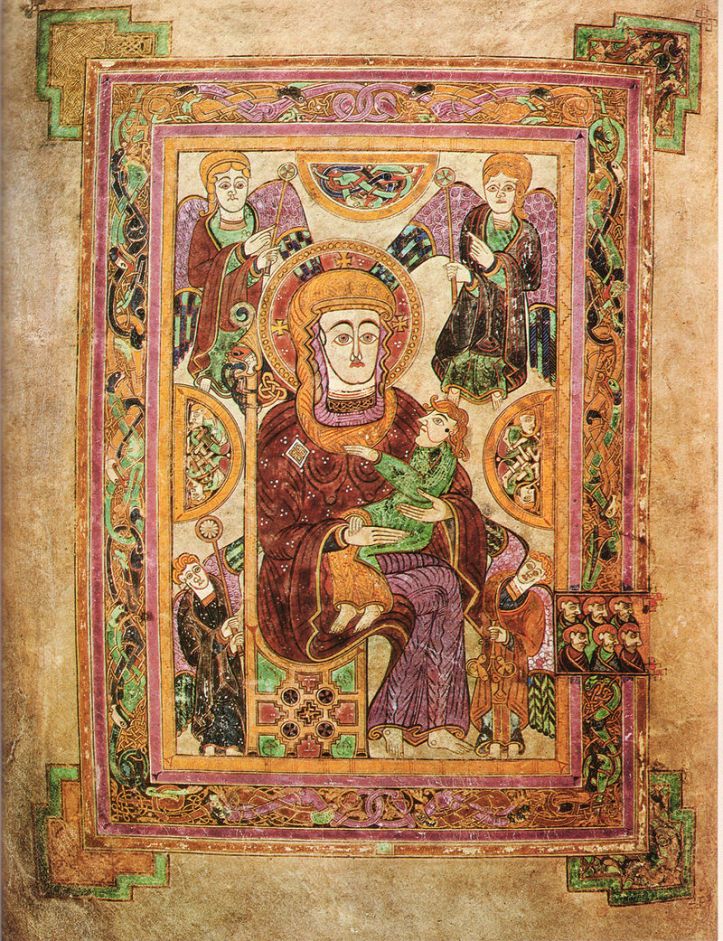 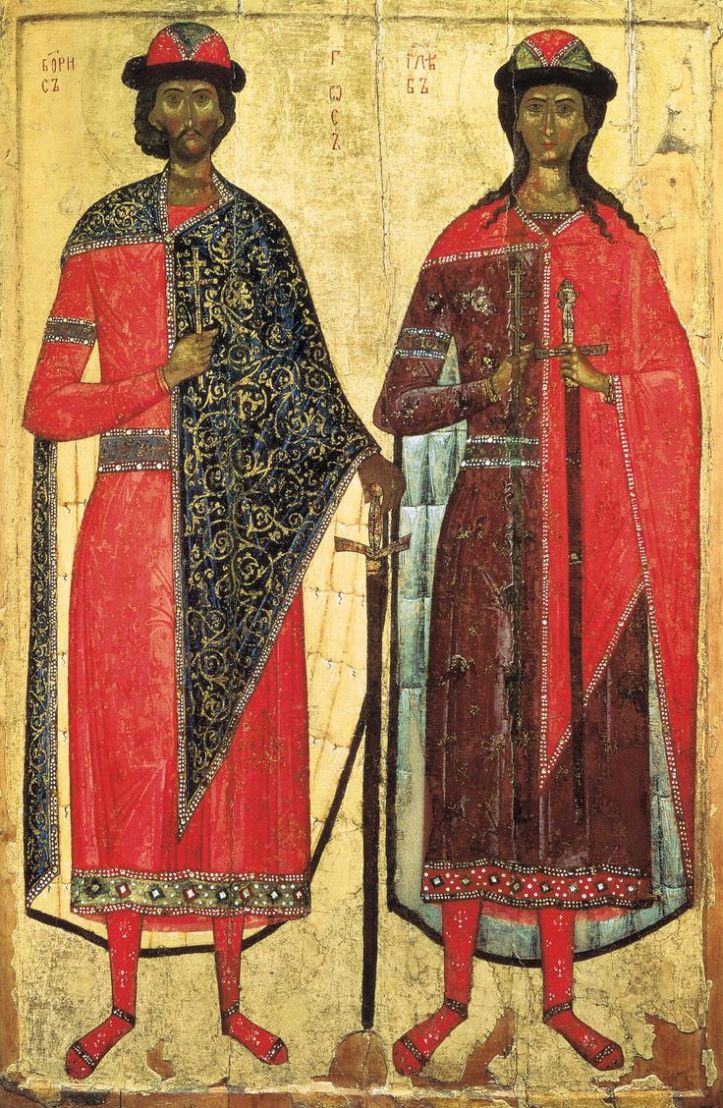 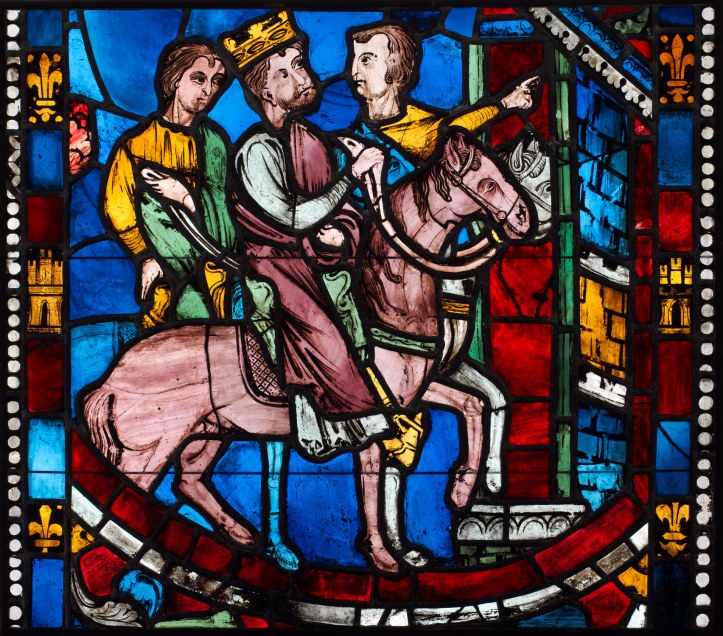 (Theodosius Arrives at Ephesus, from A Scene from the Legend of the Seven Sleepers of Ephesus, stained glass window made in Rouen, France, c. 1200.  Metropolitan Museum of Art, New York) 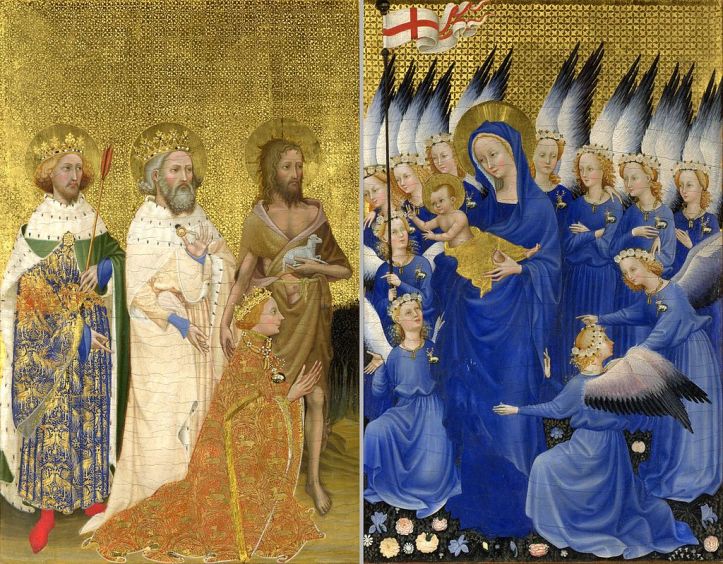 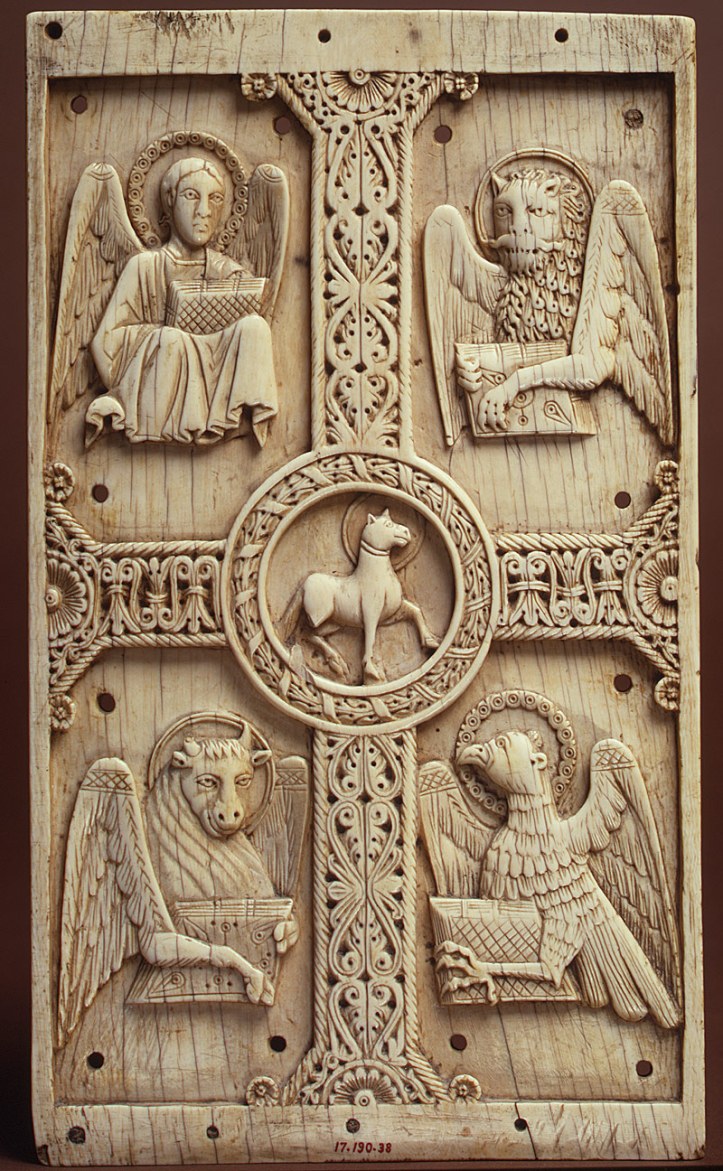 (Plaque with Agnus Dei [“Lamb of God”] on a cross, with the emblems of the Four Evangelists, carved from elephant ivory, made in Italy c. 1000.  Metropolitan Museum of Art, New York) 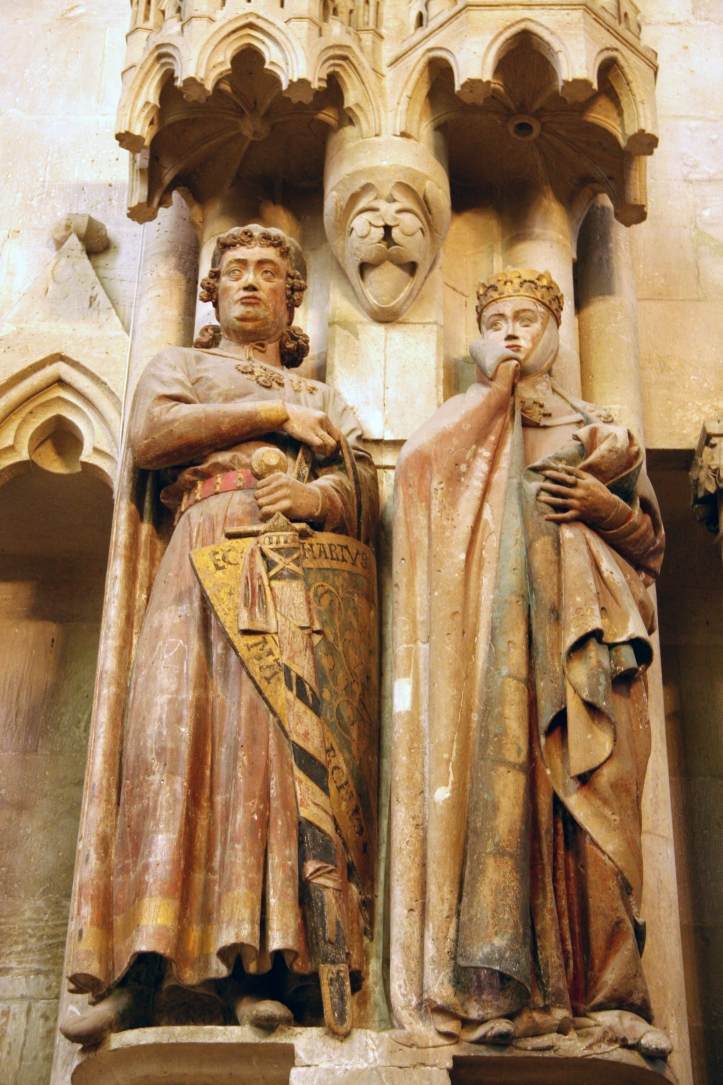 (Statues of Margrave Ekkehard I and Margravine Uta of Meissen, founders of the Naumburg Cathedral in eastern Germany.  The statues were carved sometime in the mid-thirteenth century, and are considered to be the finest examples of Gothic sculpture in Germany.) 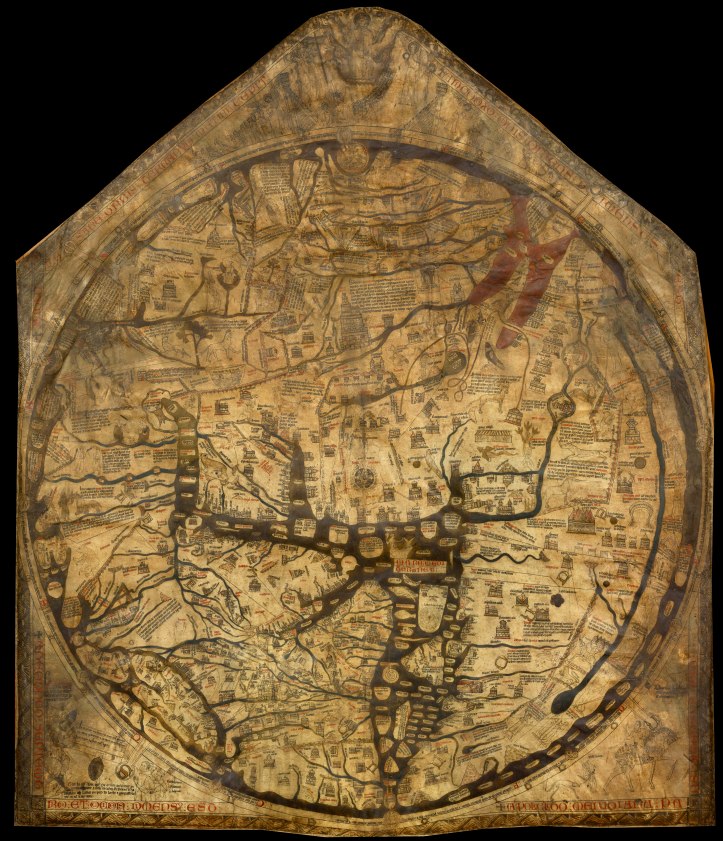 There were many great works of art created during the medieval period, but for me the most beautiful were the illuminated manuscripts.  These were books written on parchment or vellum, hand-written by scribes, and illuminated with brilliant inks.  Of all the manuscripts that have survived, my favorite is the Très Riches Heures du Duc de Berry.  Written in the early 1400s, it is one of the most beautiful of all human creations, in my opinion.  It is also one of best places to find medieval representations of ordinary people: farmers, scribes, soldiers, and so on.

There have been several facsimiles of the Très Riches Heures printed, especially since digital photgraphy and printing have made such recreations easier.  However, if you want to see the original, you’ll have to go to Chantilly, France, and see it at the Museé Condé there!

I’ll end this post with several pictures from this wonderful book.  I hope you’ve enjoyed this visit to the Medieval World! 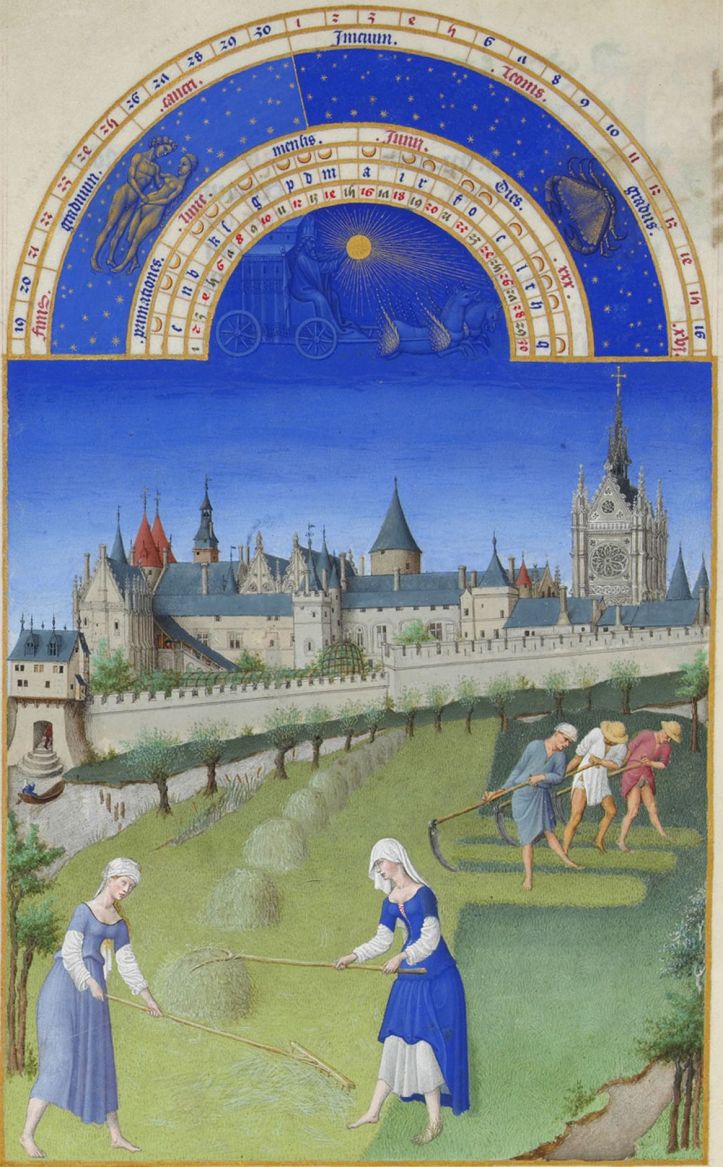 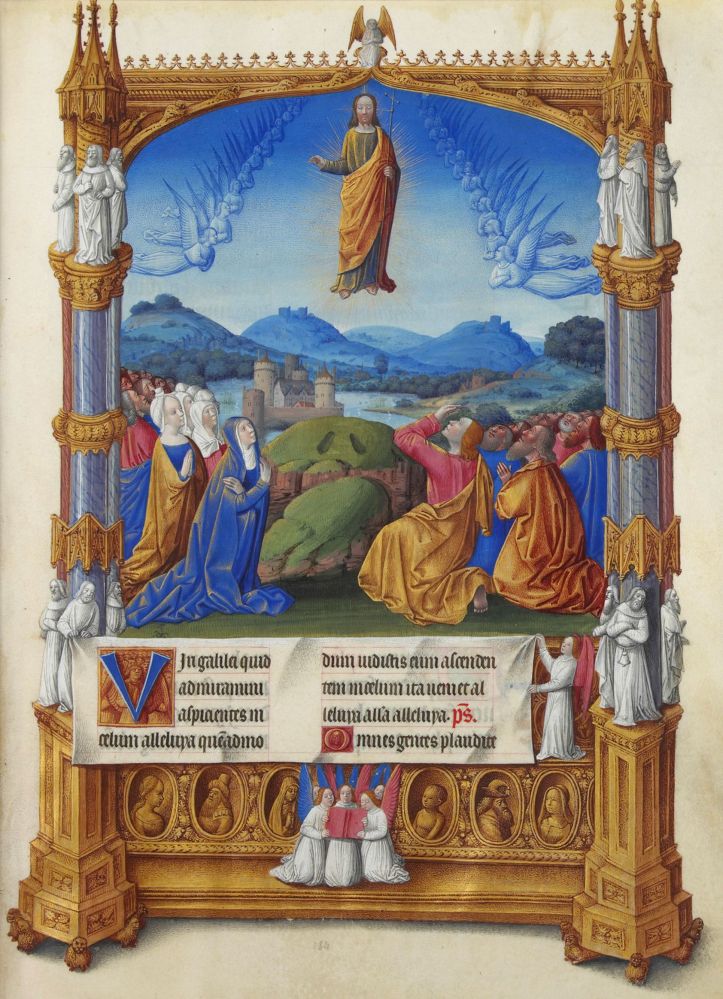 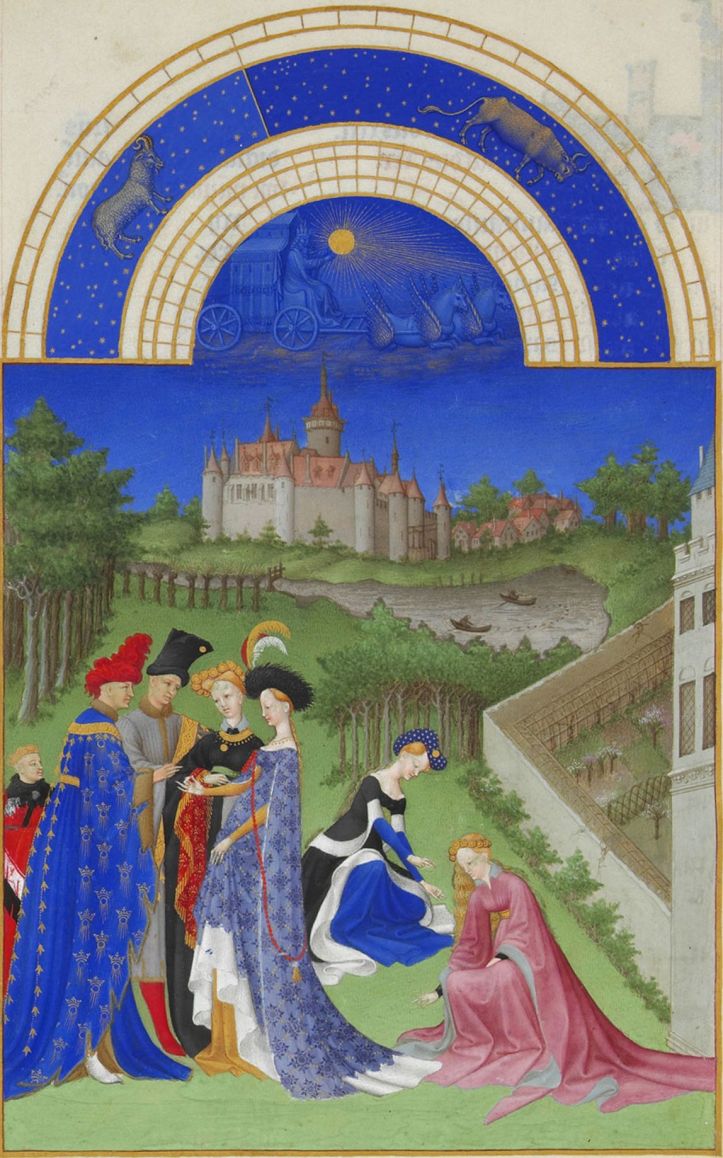 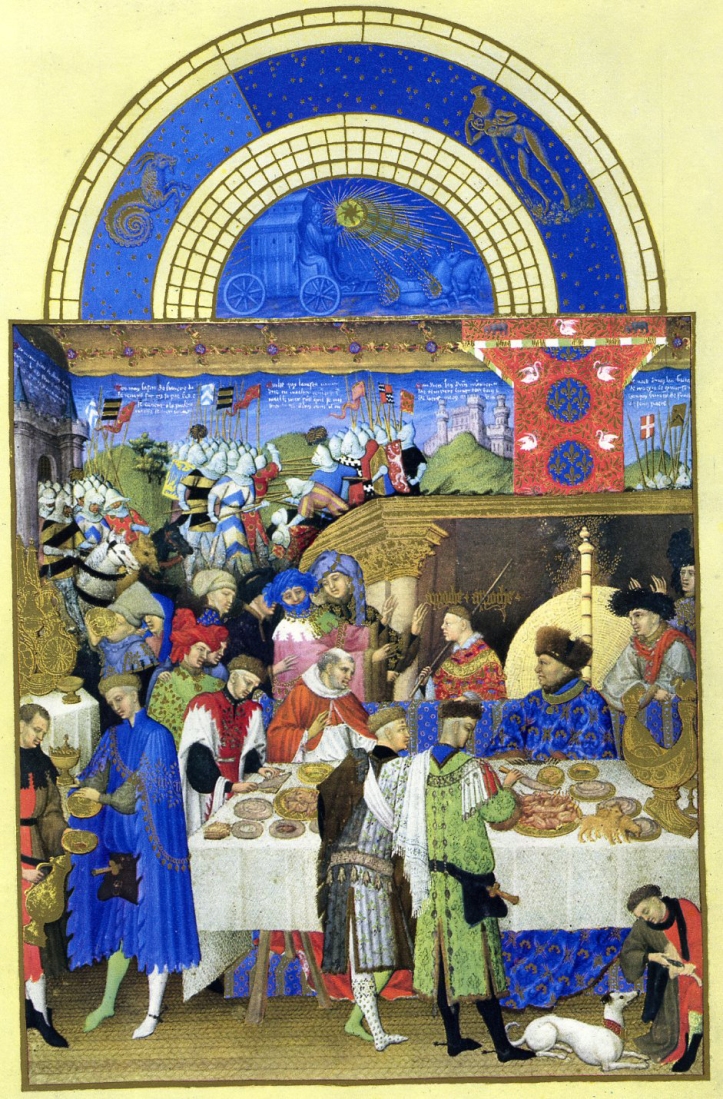 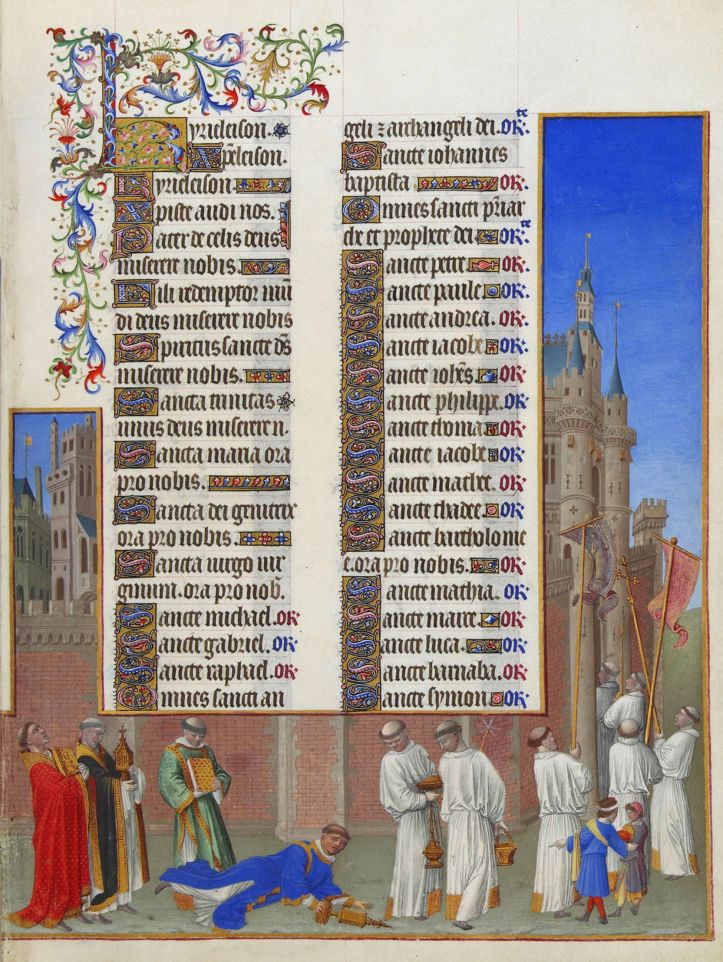 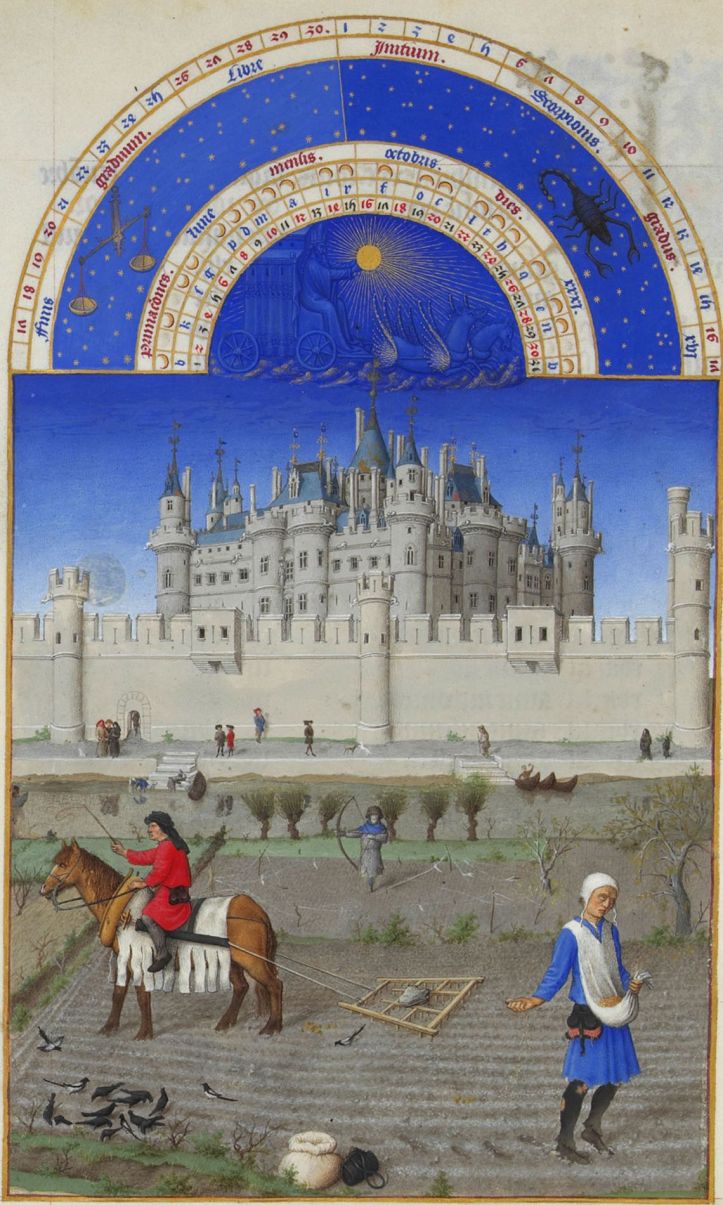 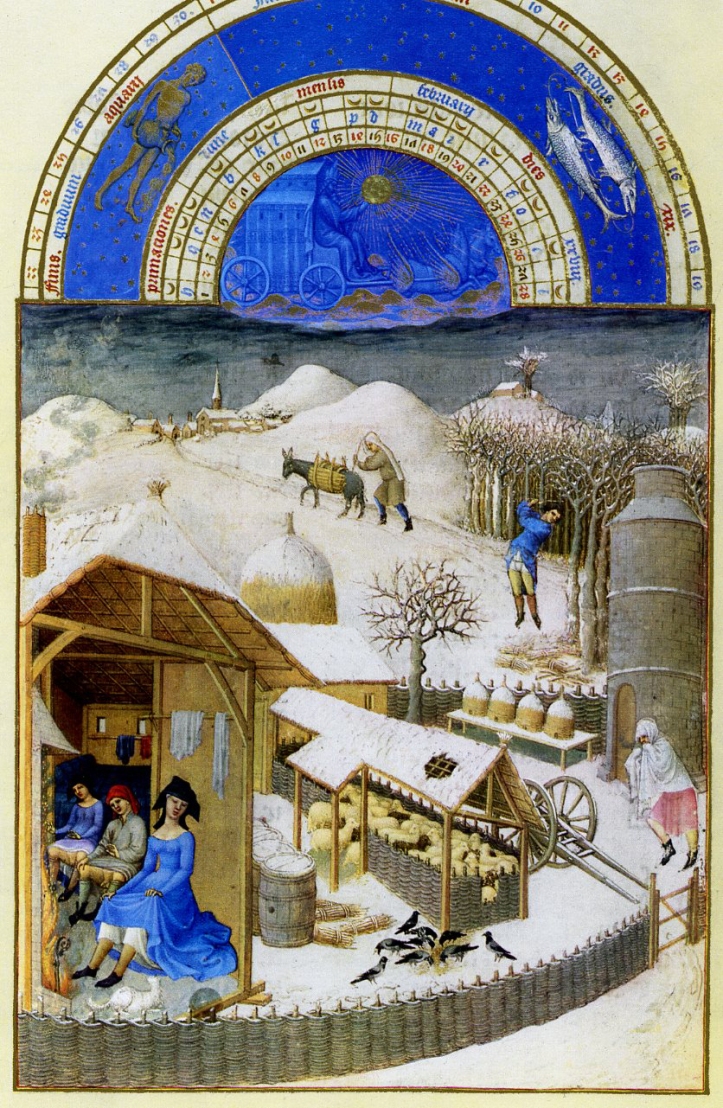