We’ve all heard the phrase “tourist trap.”  It’s usually used to describe a place designed to attract tourists and then separate them from their money.  Some probably come immediately to mind.  For me, anything Disney (one of the parks, other properties like Times Square, or the Disney stores) is the best example of a tourist trap.

(The Matterhorn [the Monorail on the right] at Disneyland, California: I could ride that all day!)

But let’s be honest: sometimes tourist traps can be downright fun!  (I know I’m paying too much for food and entertainment, but I can’t resist the original Disneyland!)  So let’s look at some of these tourist traps that, even when we know what they are, we just HAVE to visit!  This will be the first in a series: more to come, from all over the world!

While we’re talking about US tourist traps, let’s talk about a phenomenon that, as far as I’ve seen, is unique to the United States: highway billboards directing  you to tourist traps.  These are especially prominent west of the Mississippi River, where there are longer distances between urban areas, and drivers are looking for places to stop.  What makes these “ad campaigns” so interesting is that we’re not just talking about one or two signs.  There might be DOZENS of them, one every few miles, reminding you how far you are from a place, and mentioning the cool things that you can see/do/eat/buy there.  And they might stretch over hundreds of miles!

Buc-ee’s (pronounced “Bucky’s”) is a chain of convenience stores and gas stations across Texas.  I first experienced Buc-ee’s a few years ago while visiting my old college roommate in Houston. We did some road-tripping in search of Texas barbeque (best in the world, of course!) and as we were driving on Interstate 10 towards Lockhart TX, we started seeing the Buc-ee’s signs.  And there were a LOT of them!  That trip takes about 2.5 hours, and I’d guess we saw at least forty signs (probably more) along the way.

Buc-ee’s mascot is a beaver, so all of their ads feature a beaver.  Some of them are really funny, and after seeing five or six signs, I turned to my friend and said, “What  is Buc-ee’s?”  He laughed and said, “Oh, that’s something you’re going to have to experience.  You can’t come to Texas and not go to a Buc-ee’s!”

My friend is not one for hyberbole, so I was really curious by the time we exited I-10 at Luling and stopped at what I can only describe as a commercial carnival!  The Buc-ee’s in Luling is right off the interstate, and is not even the biggest one in the chain.  But it was without question the biggest “convenience store” I’ve ever seen!  They sell EVERYTHING there.  (OK, I didn’t actually SEE any tanks or aircraft carriers on sale, but I’d bet they could order one for you!)

Buc-ee’s based their early success on two simple promises: low-priced gas and absolutely spotless restrooms, and they’ve stayed true to both.  The bathrooms were amazingly clean.  And this was something cool: in the men’s room (and I assume also in the ladies’) each toilet was in its own private little room: amazing privacy on a highway!  The following series of pictures give you some idea how important bathrooms are in their marketing!

Now, you’re probably thinking, “bathrooms?”  Yes, I mean bathrooms.  In fact Buc-ee’s has become legendary for their attention to clean bathrooms.   And in 2012 they even got an award from Cintas, the company that provides businesses with uniforms and bathroom supplies.  They named Buc-ee’s the winner of the America’s Best Restroom contest!  (I didn’t take any pictures in the restroom, because even for me that’s just too weird!)  But if you google it, you can find some great pictures!

One of the cool things about Buc-ee’s is that you can buy bumper stickers of their road signs.  As you’ve probably noted, I bought quite a few and photographed them!  They’re too cool to actually put on my car!  🙂

I didn’t take a lot of pictures inside because, to be honest, I was too busy running around gaping at all the stuff they had for sale.  Like an ENTIRE WALL of jerky!  They had flavors there I’d never seen before (“peppered elk jerky, anyone?”).  They also have a massive wall of candy and treats.  The most famous thing is “beaver nuggets”.  They’re made from corn, and are buttery and crunchy.  Hard to describe, but very popular! 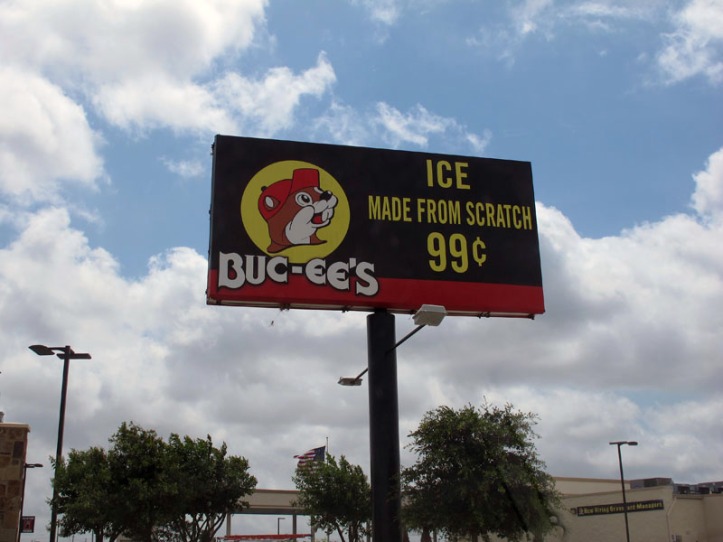 (Even the ICE is made from scratch!  🙂

There are also a LOT of T-shirts for sale.  Pretty much any kind you can imagine: as long as you don’t mind having a beaver somewhere on it, you’ll find it at Buc-ee’s!  Here are just a few examples. 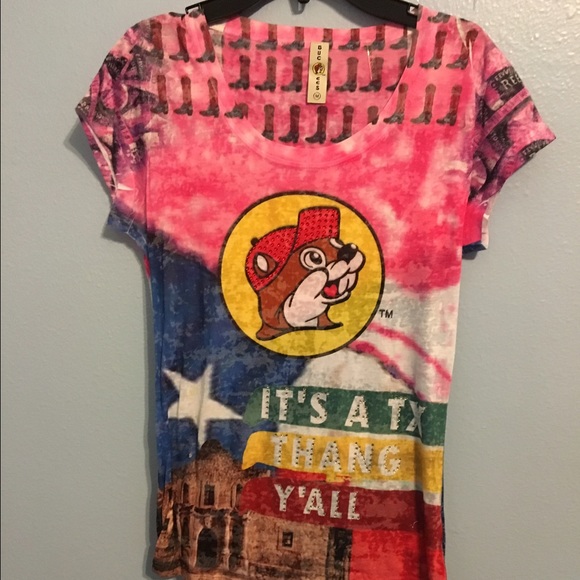 Besides selling pretty much any kind of beaver-themed souvenir you could ever think of, and candy and beef jerky, Buc-ee’s also has a Texas-style deli that sells all kinds of freshly-made sandwiches, BBQ, and pastries, all made fresh in each store.  There are a lot of German and Czech pastries, reflecting the influence of those nationalities on the settlement of Texas. 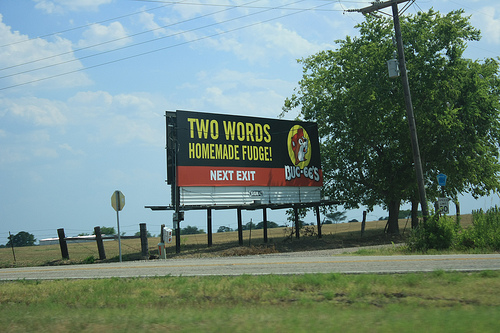 They also sell lawn care, hunting and fishing, and household supplies.  You can even buy a full-sized barbeque smoker there!  (It doesn’t get much more “Texas” than that!”

If ever you have the good fortune to go to Texas, make it a point to look for a Buc-ee’s on your drive.  You’ll be glad you did, tourist trap or not!